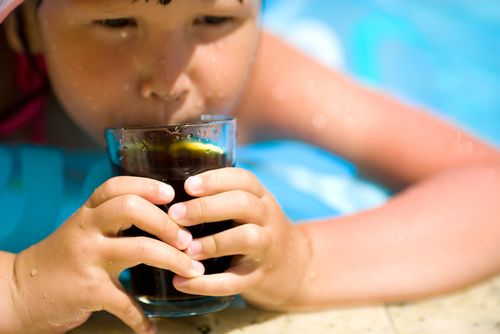 A recent study showed that the percentage of children who drink diet drinks doubled between 1999 and 2008. Is diet soda the answer to childhood obesity?

About a quarter of adults drink no-calorie or low-calorie sweetened drinks and foods. Kids imitate their parents and other adults they admire, and they seem to be picking up this habit, too.

There’s a lot of pressure on parents to keep kids from getting fat. Some companies are specifically marketing artificially sweetened children’s drinks. While the usual answer is to send kids out to play and not worry about the calories they’re consuming, Marion Nestle and Malden Nesheim pointed out that the amount of physical activity Americans engage in has basically stayed the same since the 1980s.

So what’s a health-conscious parent to do? Since kids are burning as many calories today as they did in days of yore, that leaves only caloric intake to tinker with. In searching for ways to reduce calories, many parents seem to be looking to artificial sweeteners for their kids’ food.

Some say that replacing sugar-sweetened drinks with drinks with artificial sweeteners is a step in the right direction. I suppose that could be true, but it doesn’t really go far enough. Why are kids drinking sugar-sweetened beverages in the first place? Especially often enough that the sugar might affect their weight.