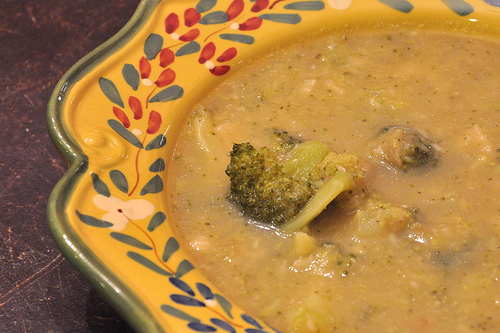 Whenever it’s time to pick out recipes for the following week, my boyfriend and I constantly disagree over the amount of soup we will eat.

His response is always seven days per week, mine is always zero to one if it’s a good hearty soup like chili, and then we meet somewhere in the middle. I’ll allow more soup if there are Saltines thrown in the mix. He’ll allow less if we can have more brussel sprouts (I know, who is he?)

This recipe will hands down end the soup feud.

Taken from Isa Chandra Moskowitz’s Appetite for Reduction, this recipe also fooled my non-vegan coworkers at how “cheesy” it seemed.

Recipe from From Isa Chandra Moskowitz’s Appetite for Reduction

Image Credits: What the Hell Does a Vegan Eat Anyway?; The Post Punk Kitchen