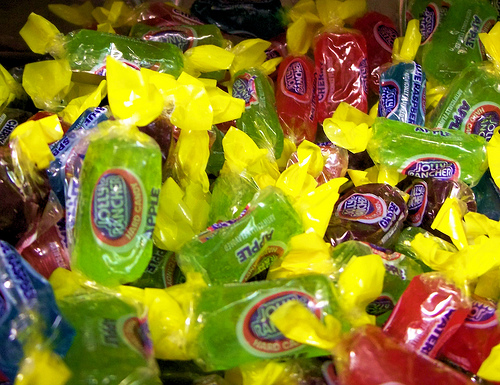 Amy Hu was reaching for a blue Jolly Rancher when she spotted something white in the bag “which didn’t make sense…” And, boy was she right.

If stories of radioactive oatmeal don’t make you want to grow all your own food, maybe what you find in food made by others according to Huffington Post, Amy Hu from California reached into a bag of Jolly Ranchers and found an old, nasty razor blade half of which was covered in white tape. Not until Hu’s husband posted a photo on Hershey’s facebook page did the candy giant respond. The remedy: offering Hu three bags of free candy. Ugh.

You can read the entire story in HuffPo, but if you really want to have fun, check out the 30 (yes, 30!) photos in the slide show of other mealbreakers (defined as: nasty, non-edible surprises found in food while it is being eaten; often lawsuit-provoking, sometimes fabricated, always disgusting) highlighted at the bottom of the HuffPo post.  The slide show shows your worst gross food fears come true including photos of a dead mouse baked into a loaf of bread and a deep-fried insect stuck to the a McDonalds hash brown.

Just 30 more reasons to know where your food comes from …