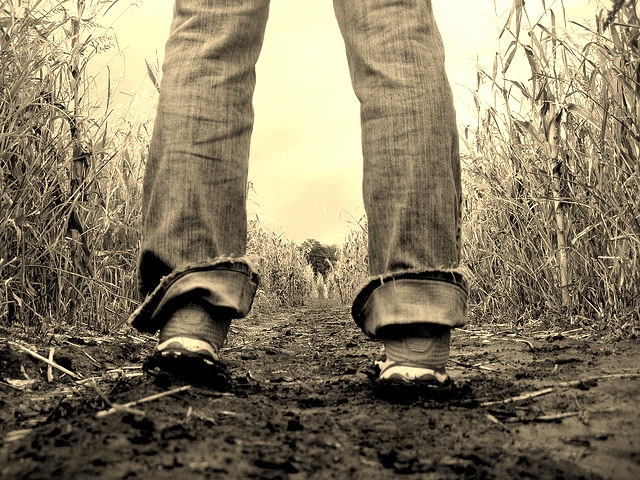 This year’s drought has hit US farmers below the (corn) belt, prompting fears of global food riots and shortages. With global climate change promising more drought, high temperatures, and severe weather events, it’s time to take a good hard look at our food system in terms of domestic and global food security — and to ask ourselves if there’s a better way to eat, in a world of rising population and shrinking resources. (Hint: there is!)

US Corn and the Global Village

Corn and soybeans soared to record highs [last Thursday], as the worsening drought in the U.S. farm belt stirred fears of a food crisis, with a U.S. government agency forecasting that the heat and dryness will extend into next month in the Midwest.

The forecast by National Oceanic and Atmospheric Administration bodes ill for soybeans, which will go through the critical yield-setting stage in the next two weeks into August and need adequate moisture for proper growth.

About 80 percent of the corn crop is already pollinating. Hopes are fading fast for any recovery in yield in areas hardest hit by the worst drought 56 years, analysts said.

The United States dominates the global corn market, growing the grain most commonly used for animal feed and processed food around the world. As food security expert Robert Thompson of the Chicago Council of Global Affairs told the Guardian this week,

“What happens to the US supply has an immense impact around the world. If the price of corn rises high enough, it also pulls up the price of wheat,” he said.

He went on: “I think we are in for a very serious situation worldwide.”

Some analysts are predicting a repetition of the 2008 protests that swept across Africa and the Middle East, including countries like Egypt, because of food prices.

Experts predict a short-term dip in US beef prices as producers cull herds ahead of increasing feed prices, followed by price spikes in 2013.  Prices for eggs, dairy, veal, poultry, and pork are also expected to rise significantly.

Given global climate trends, food production is likely to be affected by such extreme weather events for the foreseeable future. With that in mind, what’s the best use of our arable land?

I propose that the best use of resources involves growing — I know it sounds crazy — actual human food!

Animal agriculture is inherently inefficient: by running the food we grow through animals before eating it, we squander enormous amounts of food energy and natural resources.

We’re draining our largest inland freshwater supplies at an unsustainable rate, to water factory-farmed animals and to grow corn for animal feed. Any time you take a step up the dietary food chain — i.e. eating the cow, instead of the plants you fed the cow — the vast majority of the energy from the original source (often corn) is lost, due to the metabolism and other life processes of the intermediary (the cow). The very best conversion rates (some fish, chicken, eggs) still produce much less food energy than consuming the energy directly, in plant form.

In a world of rising human population and limited  natural resources, with food stability and resource scarcity looming as a very real global concern, shifting towards a plant-based food system just makes sense. Let’s use our farms to grow food for people, instead of food for animals!

Benefits of a Plant-Based Paradigm? Glad You Asked!

On a global scale, moving towards sustainable farming of crops for people to actually eat — instead of resource-intensive unsustainable GMO-driven agriculture, focused on growing grain to feed farmed animals — could go far towards alleviating food shortages, limiting food scarcity, and improving food stability and self sufficiency within developing nations.

Here in the US, decentralizing food production and shifting towards sustainable local plant-based agriculture could stabilize food prices by reducing dependence on just one crop (i.e. corn). It would also reduce the problem of food desserts, by improving access to healthy food in traditionally poor areas.

A shift away from industrial animal agriculture in the US would also decrease pollution and fossil fuel usage significantly, alleviating some of the main factors contributing to global climate change in the first place.

On a smaller scale, with price hikes poised to hit the animal-derived foods at the core of the standard American diet, there’s never been a better time to explore plant-based eating!

Beef prices through the roof? Eggs too expensive? Sticker shock from bacon shopping? Nooooo problem: dried beans, chickpeas, and lentils are super-cheap! Seasonal produce from your local farm-stand or CSA group costs a fraction of that stuff on the meat-and-dairy aisle!

Shifting towards a cook-from-scratch, whole-foods, plant-based diet can slice your grocery budget down to managable proportions, as your neighbors bemoan the high cost of burgers and chicken nuggets — even as it reduces your risk of diabetes, cancer, and heart disease, and lowers your cholesterol. What a deal!

We’re seeing record occurrence of severe weather events, like the drought currently hurting US corn farmers and threatening global food prices. At its core, the problem is one of sustainability, not drought: what we’re doing simply can’t continue.

By insisting on plowing forward down the path of unsustainable animal-based agriculture — in a world of growing population density and finite declining resources — we guarantee ourselves problems with food security, food scarcity, and resource corruption on a global level.

At every level — from US farm policy to tonight’s dinner plate — the changing agricultural landscape demands a new paradigm. Shifting towards a sustainable, decentralized plant-based food system would mean more efficient use of resources; increased food stability; and less contribution to global climate change, affecting future droughts and other severe weather events.

At no extra charge, we would also see less pollution, less animal cruelty, and improved health — what a bargain!

Habit is a powerful force, and industrial animal agriculture has driven the US food system for the last few decades. But our agricultural system doesn’t match our needs, and no longer benefits the people of this small planet.

Let’s grow food for people, not animals. Let’s use our limited resources wisely, and not squander what we can’t replace. Let’s embrace the fact that animal-based agriculture fails the world, in terms of food security and sustainability.

The current drought, corn shortage, and concern over food prices serve to shine a harsh light on the many problems inherent in animal-based agriculture. These problems will continue, long past this particular drought.

In a world of diminishing resources, a plant-based food system offers positive change to a troubled agricultural world.