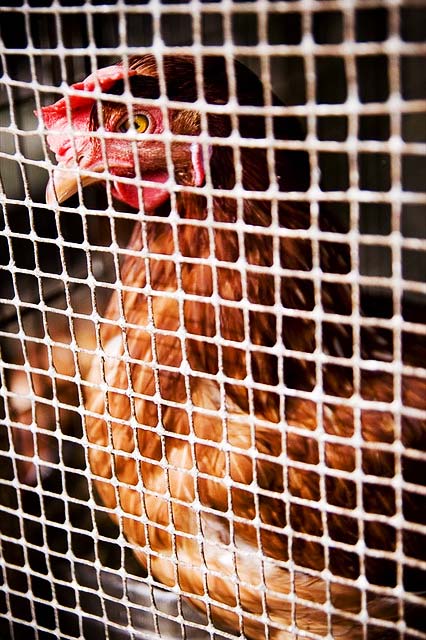 Earlier this month, consumer advocate and Food & Water Watch lobbyist Tony Corbo requested the opportunity to work in a HIMP facility, to gain understanding of the new (self)regulatory process and how it effects our food supply. The National Chicken Council denied Corbo’s request last Friday: they greatly prefer no transparency at all, please and thank you! Anyone surprised?

“Secretary of Agriculture Tom Vilsack has repeatedly observed in recent weeks that most consumers do not know how their food is produced in this country. He is correct,” Corbo wrote to NCC. “Therefore, I want to learn first-hand how poultry processed with fewer government inspectors will lead to a safer and more wholesome food supply.”

With the recent proliferation of ag-gag bills, we’ve seen how eagerly the animal agriculture industry seeks to limit consumers’ knowledge of what’s going on with their food. Many of these bills criminalize undercover investigators, to protect people (who know perfectly well they’re behaving badly, or they wouldn’t be so determined to hide) from being observed ‘under false pretenses.’

Ok, well, here you go: no false pretenses. You say this new (non)regulatory system will work better; that doesn’t seem like a logical assertion, but all right. Let’s see it in action — maybe we just don’t understand how it all works.

Last Friday, Corbo received a letter from the National Chicken Council, flatly denying any possibility of any such experience under any circumstances. The letter explained that the training process for a chicken sorter on an evisceration line is ‘substantial’, and they have to ‘learn and understand the specific company’s policies and procedures.’ So, Corbo’s request was ‘unrealistic.’

Um. Guys? That’s what he wants to learn about! This allegedly substantial training could show consumers (Corbo included) that you’re on top of things, after all. And duh: it’s the specific policies and procedures that we’d all like to understand a little better, since, you know, you’re trying to get us to eat the end result of those policies and procedures!

NCC has complete confidence in the effectiveness and thoroughness of the USDA inspection system, as well as the commitment and competence of company trained individuals.

So, to paraphrase: you don’t want consumers to see what you’re doing, under any conditions whatsoever. BUT! It’s all working fine! Really! Scout’s honor! You are confident of it, and assure us of it; so obviously it must be true.

After all, if there’s one thing the industrial animal agriculture community is really super-great at, it’s self regulating to avoid problems before they’re caught red handed, engaging in heinous and inexcusable behavior.

Mr. Corbo’s idea was a reasonable request for increased transparency, from an industry determined to avoid any such thing. The HIMP program seems very likely to cause increased worker injury and food safety problems, and the National Chicken Council clearly hopes those things can stay behind closed doors.

Really, you have to give factory farming interests some sort of credit for task perseverance. Never mind that shoppers all over the US are clamoring for more sustainability, less cruelty towards farmed animals, and improved transparency within our food system. Those guys cling to their failing system like remoras on a dying shark, determined that if they just pretend hard enough that they aren’t engaging in problem behavior, consumers will go away and stop bothering them with demands for sustainable and ethically produced food.

Don’t pay ’em to keep you in the dark! Plant-based cooking is healthy and delicious; or if you’re set on chicken for dinner, go to localharvest.org to find farms or processors near you that don’t mind a visit. Food system transparency is the friend of consumers, farm workers, and farmed animals.

The National Chicken Council, not so much.