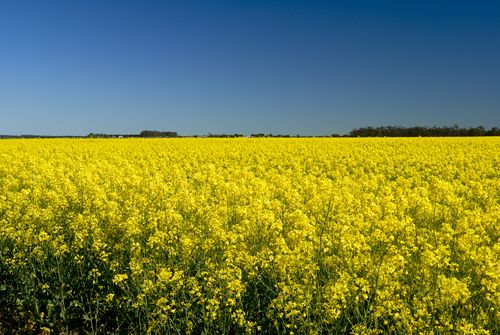 Steve Marsh owned a certified organic farm in Western Australia. He still owns the farm, but he lost his organic certification in 2010 when his neighbor’s Roundup Ready canola blew onto his farm and got mixed in with Marsh’s oats and wheat.

Now 70% of Marsh’s farm contains GM plants interspersed with his organically grown crops. He has lost organic certification over that portion of the farm and cannot receive the premium for growing organically.

The neighbor had left a five-meter (about sixteen feet) buffer zone around his GM field, which is the minimum the law requires in Western Australia. When the GM canola was harvested, it was left on the ground to dry. Before it was gathered, gusty winds and mild flooding caused the seeds from the GM canola to go onto Steve Marsh’s organic farm.

Lawyers for Steve Marsh filed in the Supreme Court last week. The case will decide if Steve Marsh is owed damages for the contamination of his organic farm.

If the court finds that a five-meter buffer between crops is not enough, then it will impact the laws already in place.

More broadly, the outcome of the lawsuit will determine if farmers have the right to decide how they use their own land. The law in Western Australia has already determined that farmers may grow genetically modified crops if they choose. Will farmers also get to choose to grow organically?

Related:  There’s a law sitting in committee in the U.S. House of Representatives that addresses this same issue.