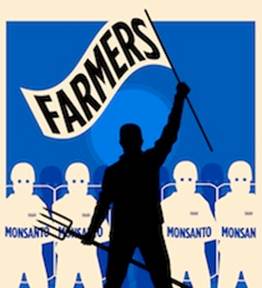 “Farmers have the right to protect themselves from being falsely accused of patent infringement by Monsanto before they are contaminated by Monsanto’s transgenic seed,” said Dan Ravicher, Executive Director of the Public Patent Foundation (PUBPAT), a not-for-profit legal services organization based at Benjamin N. Cardozo School of Law that represents the plaintiffs. “Judge Buchwald erred by denying plaintiffs that right and they have now initiated the process of having her decision reversed.”

Monsanto’s harassment of family farmers is well known in farm country, the biotech seed and chemical giant has one of the most aggressive patent assertion agendas in U.S. history. Between 1997 and 2010, Monsanto acknowledges filing 144 lawsuits against America’s family farmers, while settling another 700 cases out of court for undisclosed amounts and imposing gag orders on farmers.

The farmers’ fears were heightened when Monsanto refused to provide a legally binding covenant not to sue in the future, signaling the corporation’s intention to maintain their option to pursue innocent family farmers in the future.

“Farmers are under threat. Our right to farm the way we choose, and to grow pure organic seed and healthy food on our farms for our families and for our customers is under assault,” said Maine organic seed farmer Jim Gerritsen of Wood Prairie Farm, President of lead Appellant OSGATA. “We are honor-bound to challenge an erroneous ruling which denies family farmers the protection the law says we deserve. We’re not asking for one penny from Monsanto. Ultimately, our fight is for justice and is waged to defend the right of the people to have access to good and safe food.”

The Plaintiff/Appellant group is comprised of individual family farmers, small and family-owned seed companies and agricultural organizations. They are all organic or committed to farming without using genetically engineered seeds, and have no desire to produce food with Monsanto’s patented GMO technology. However, they are fearful that Monsanto’s genetics, in the form of pollen or seed will trespass onto their farms and that the resulting contamination of their crops will be viewed by biotechnology giant as illegal ‘possession’ resulting in patent infringement allegations.

“America’s farmers deserve to be protected under the law from the unwanted genetic contamination of their crops by Monsanto’s flawed genetically engineered seed technology,” said David Murphy, founder and Executive Director of Food Democracy Now!, an Iowa-based national advocacy organization of more than 300,000 members.

“We need the courts to protect farmers and consumers from genetic trespass and pollution of our food chain,” said Will Fantle, Codirector of The Cornucopia Institute, a corporate and governmental watchdog in the organic industry. “This lawsuit is critical to the future of organic food and agriculture.”

The Cornucopia Institute is a Wisconsin-based nonprofit farm policy research group, is dedicated to the fight for economic justice for the family-scale farming community. Their Organic Integrity Project acts as a corporate and governmental watchdog assuring that no compromises to the credibility of organic farming methods and the food it produces are made in the pursuit of profit. Their web page can be viewed at www.cornucopia.org.