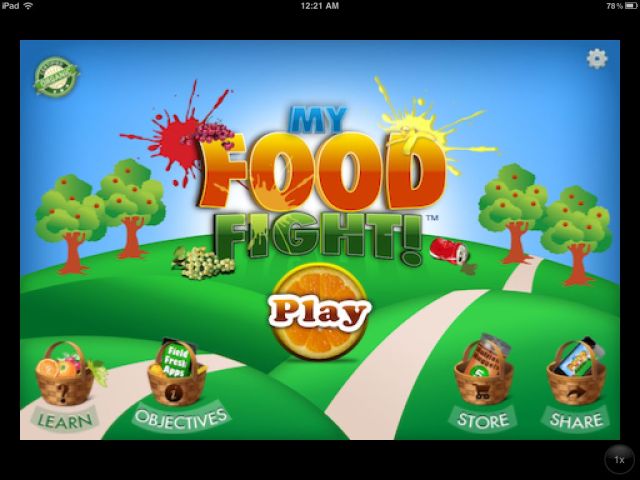 My Food Fight! is a fun new app designed to teach kids healthy choices. It can be downloaded free from the iTunes store. In-app purchases benefit The Organic Center, a group that strives “to conduct credible, evidence-based science on the health and environmental benefits of organic food and farming and communicate them to the public.”

My Food Fight! uses a game format to expose kids to healthy, organic foods. The healthier the foods, the better their character does in the game. Also included is a guide to identifying safe and nutritious food with lists of pesticide-laden foods, GM foods currently on the market, and superfoods.

The Organic Center is an organization whose mission is to conduct credible, evidence-based science on the health and environmental benefits of organic food and farming and communicate them to the public.

The character runs through a neighborhood, jumping and ducking to catch healthy foods, like broccoli and blueberries. Different foods increase the health and energy of the character by different amounts so that he can run longer.

Some foods, like pizza, give a small amount of energy, while others, like soft drinks, actually remove energy.

I tested this game on some kids and they all enjoyed it. The only criticism they had was the lack of evil monkeys chasing the character. Maybe the developers will consider adding some in a future release.

With all the advertising for junk food that is aimed at kids, it’s important to provide some reinforcement for healthy eating. This game provides a simple, fun way to do that.