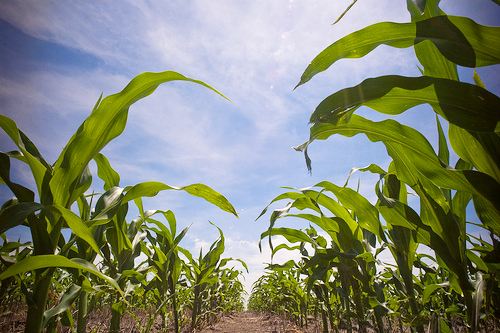 Superweeds now run amok in Roundup Ready fields, due to the completely predictable emergence of glyphosate resistance in pest plants.

Bursting with eagerness to make life as easy as possible for its corporate sponsors, the USDA recently announced a plan to cut approval time in half for stacked resistance GE crops. Under the new guidelines, these could be approved for use in 13-16 months instead of 3 years.

Proposed changes would also include moving the public comment phase to the beginning of the approval process — conveniently placing a time barrier between the voicing of consumer concerns and the (seemingly inevitable) approval of the biotechnology products warranting those concerns.

According to Business Week,

The move to speed biotech approvals comes as seed-makers develop new technologies aimed at slowing the spread of so- called superweeds that are no longer killed by Monsanto’s Roundup herbicide. Half of the 12 plants designated for faster review by the USDA are herbicide-tolerant crops made by Monsanto, Dow, DuPont Co., Bayer AG (BAYN) and BASF AG.

But don’t worry! Monsanto and Dow are sure that weeds would never ever EVER develop resistance to both Roundup and 2,4-D!

Of course, as NPR points out, less than ten years ago Monsanto said the very same thing about the now-rampant Roundup-resistant superweeds:

In 1993, when Monsanto asked the U.S. Department of Agriculture to approve Roundup-tolerant soybeans, it dispensed with the issue of potential resistant weeds in two modest paragraphs. It told the agency that “glyphosate is considered to be a herbicide with low risk for weed resistance.”

The company also wrote that several university scientists agreed “that it is highly unlikely that weed resistance to glyphosate will become a problem as a result of the commercialization of glyphosate-tolerant soybeans.”

Oops. Since then, resistance to glyphosate has emerged in 20 different weed species.

Monsanto and Dow will make a lot of bucks off the new stacked resistance GM seeds, but they won’t solve the underlying problem — indeed, in terms of health impacts, environmental problems, and herbicide resistant weeds, the problems will almost surely worsen upon implementation of the new GM  ‘solution.’

And now, under new USDA guidelines, it can get worse faster.

Condensed recap of events to date:

Bill Freese of the Center for Food Safety calls it a rubber-stamp approach. “A real regulatory system will occasionally reject something,” he says.

Instead the USDA is clearly chomping at the bit to approve the biotech industry’s latest bad idea.