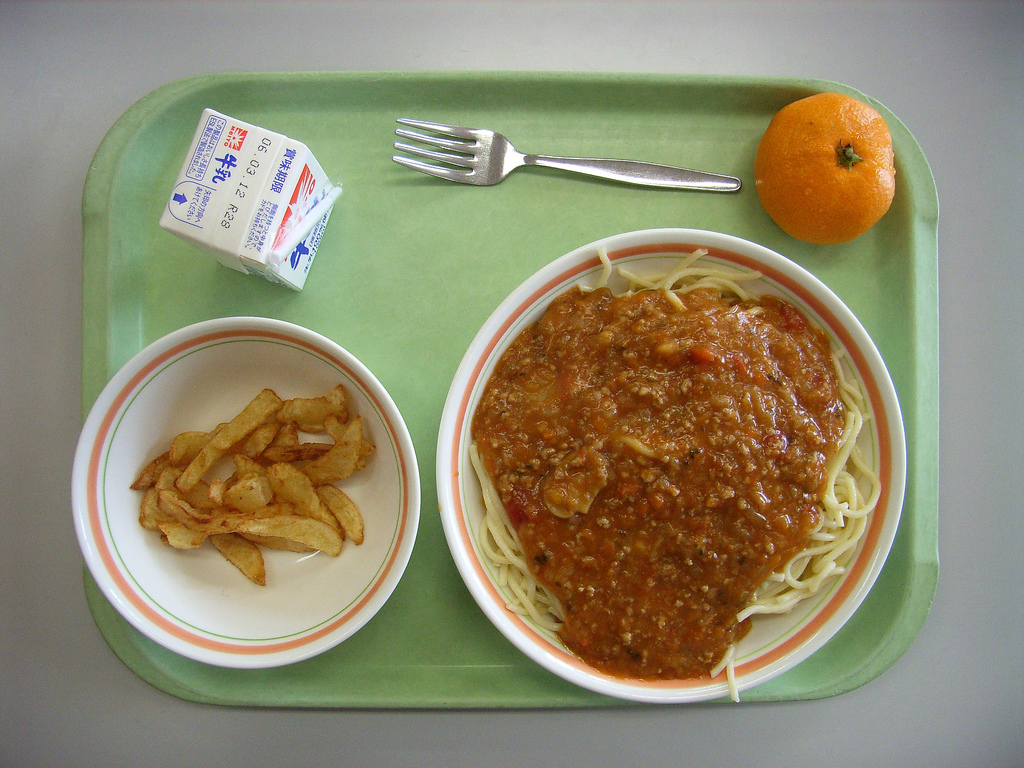 School lunch. Remember back to when eating was simple, and your daily noontime meal consisted of some sort of square pizza, a carton of milk and applesauce?

As it turns out that wasn’t exactly the healthiest way to feed ourselves. Unfortunately, school lunches are still typically worse for wear. ABC News posted a story this week about an additive in ground beef called ‘pink slime,’ as originally reported in The Daily and then Huffington Post. We also talked about pink slime here at Eat Drink Better back in 2010.

The most recent scandal with pink slime, or ammoniated beef trimmings? It’s wildly prevalent in school cafeterias. Before you start looking for underground rivers of slime a la Ghostbuster’s, let’s read more about this pink slime business from The Daily:

[Microbiologist, former United States Department of Agriculture scientist and whistleblower, Gerald] Zirnstein…first coined the term ‘pink slime’ after touring a Beef Products Inc. production facility in 2002 as part of an investigation into salmonella contamination in packaged ground beef…Shortly after the visit, Zirnstein said he did not ‘consider the stuff to be ground beef.’

Made by grinding together connective tissue and beef scraps normally destined for dog food and rendering, BPI’s Lean Beef Trimmings are then treated with ammonia hydroxide, a process that kills pathogens such as salmonella and E. coli.

This “pink slime” has recently taken off in the media due to food advocates like Jamie Oliver. So, how are these beef production companies getting away with feeding this substance to America’s kids? And why are some people saying they’re okay with it?

According to the Washington Post, using pink slime meat shaves “3 cents off the cost of making a pound of ground beef.” But, as always, what is the real cost?

The Daily says pink slime, or what the USDA is calling “lean beef trimmings,” was ushered through with “minimal safety approval,” and the product is “high risk.” The USDA is planning on purchasing  7 million pounds of the pink slime from BPI for our country’s wonderful school lunch program and says it totally “meet[s] the highest standard for food safety.” But that statement from the USDA also came with the caveat that they’re not supposed to “make judgements” on pink slime’s merits, and that their role is to simply “determine the overall safety of the nation’s food supply.”

Essentially, they are saying their job is to get rid of the salmonella by slathering on the ammonia, and then their work here is done.

Though the alloted level of ammonia treated beef was limited to 15 percent in 2005, our lovely labeling system currently does not require packages to disclose this information.

So, we may never know what our beef contains when we, for example, decide to cook for our kids’ brown bag lunches rather than having them eat what the school provides.

But we can assume the cheap stuff probably includes some slime.

ABC reported that 70 percent of supermarket beef contains this ammonia-treated pink slime, and that “the woman who made the decision to OK the mix is a former undersecretary of agriculture, Joann Smith. It was a call that led to hundreds of millions of dollars for Beef Products Inc., the makers of pink slime,” wrote ABC.

“They’ve taken a processed product, without labeling it, and added it to raw ground beef,” Zirnstein said. “Science is the truth, and pink slime at this point in time is a fraudulent lie.”

When even fast-food retailers like Taco Bell and McDonald’s have banned pink slime, which was once relegated to dog food, it’s time to rethink what is acceptable for our kids, and for ourselves.