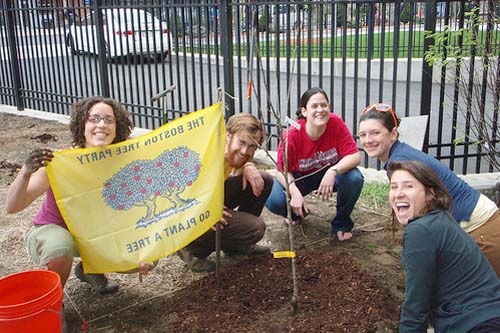 Nope, that’s not a typo in the headline. The Boston Tree Party is a gang of modern-day Johnny Appleseeds in the Boston area who are planting heirloom apple trees on publicly available land in Boston.

Remember the Guerrilla Grafters, who are turning San Francisco’s public trees into fruit trees? Apparently, the city of San Francisco “pruned” some of the Guerrilla Grafters’ trees after getting wind of where they were, removing all of the grafted branches and all of the fruit. The Boston Tree Party is also making fresh fruit more available through public fruit trees, but instead of planting on city property, they’re partnering with groups who own public land. Hopefully, that means that their trees won’t have the same problems that the Grafters are seeing.

The Tree Partiers chose heirloom apples for a few reasons:

The Tree Party is planting their apple trees in pairs, since they need to cross-pollinate in order to produce fruit. And that’s the whole idea, right? Increasing public access to fresh, healthy food!

Last spring, the Boston Tree Party planted 35 pairs of heirloom apples across Boston by teaming up with local schools, churches, and hospitals. It takes time for apple trees to start producing fruit – about four years – but when they do, they’ll provide the community with over 10,000 free apples every single year. That’s a lot of fresh, free food!

Get Involved with the Boston Tree Party

Those Tree Partiers aren’t done yet! They’re gearing up for another round of plantings this year, and Boston groups that want to help out are cordially invited to sign up until April 15, 2012. Here’s what they’re asking:

I know, this might sound like a lot, but it’s such an amazing cause! Based on the numbers from the spring 2011 plantings, within a few years, those trees should start producing over 285 apples every single year, and with proper care apple trees can live between 50 and 100 years!

If you want to get involved with the Tree Party peeps, just send an email to Amory@bostontreeparty.org for more information.

{Images via The Boston Tree Party. Used with permission.}