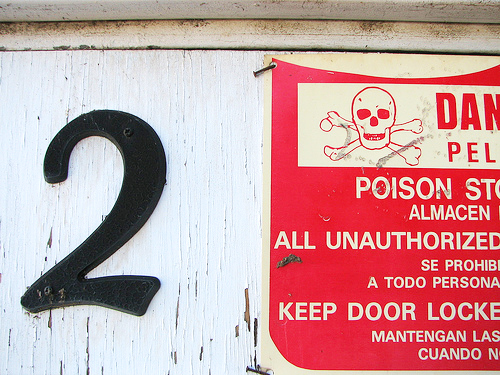 Over the past twenty years, Monsanto’s Roundup Ready glyphosate resistant GE crops have come to dominate the agricultural scene in the US. Predictably, Roundup Ready ‘superweeds‘ have evolved similar resistance, resulting in ever-increasing herbicide application and escalating use of unsustainable farming practices.

The biotechnology industry’s proposed solution? GM crops with combined resistance to glyphosate AND an Agent Orange ingredient called 2,4-D — so now we can have even MORE herbicide use and even TOUGHER intractable weeds! Yay!

What could possibly go wrong?

Quick Review: Roundup, the Poison We Can’t Get Enough Of

What’s actually happened — unshockingly, to anyone familiar with basic principles of biology or natural selection — is that weeds have evolved to adapt to their Roundup-drenched environment, and have developed independently what Monsanto spent years and billions on inventing and marketing: Roundup resistance.

Growers now committed to Roundup Ready products have had to continually escalate herbicide application, to keep yields at moderately acceptable levels. Unfortunately glyphosate, like most pesticides and herbicides, doesn’t usually stay where it’s put. It gets bored, and goes out on the town — or rather, into the groundwater, air, and ecosystem.

For this and other reasons, a recent report released by the Union of Concerned scientists gave Monsanto a stern talking-to about what the term ‘sustainable agriculture’ actually means, and why what they’re doing isn’t it.

In terms of health effects, glyphosate has been shown to cause a number of problems; and Roundup is even more toxic than glyphosate, because of the other ingredients it’s mixed with for optimal killing action. Toxicity highlights include birth defects, miscarriages, and endocrine disruption. Research also suggests that glyphosate/ Roundup may also be linked to non-Hodgkin’s lymphoma and multiple myeloma.

Unsurprisingly Roundup/ glycophosate wreaks havoc on beneficial insects, amphibians, and birds who are foolish enough to try to exist in their natural habitats, anywhere near Roundup Ready fields.

Thank You Sir, May I Have Another?

Developed in the 1940’s, 2,4-D has been shown to double the incidence of birth defects in children of pesticide applicators. It is  suspected to increase incidence of non-Hodgkins lymphoma. 2,4-D is also reported to negatively effect endocrine and immune function, and to impair respiratory and central nervous system function. According to one toxicity summary, at high levels of exposure 2,4-D acts as a central nervous system depressant that can cause severe health problems:

[High rates of exposure to 2,4-D] can cause stiffness of arms and legs, incoordination, lethargy, anorexia, stupor, and coma (EPA, 2007). It is also a respiratory system irritant that can cause prolonged difficulty breathing, coughing, burning, dizziness, and temporary loss of muscle coordination (EXOTOXNET, 1996). Other symptoms of 2,4-D poisoning include irritation, inflammation, itching, and headache (CDC NIOSH, 2005). The primary target organs of the chemical are the eye, thyroid, kidney, adrenals, ovaries, and testes (EPA RED Decision, 2005).

Long-term animal studies of 2,4-D’s chronic exposure have shown effects on the blood, liver, and kidneys (EPA, 2007). Studies have also revealed slight chronic symptoms including a reduction in weight and changes in blood chemistry (NPTN).

It is observed to be a developmental toxicant. Some observed effects are increased gestation length, skeletal abnormalities, and effects on the thyroid and gonads (EPA RED FACTS, 2005).

Unsurprisingly, 2,4-D is also toxic to birds, bees, and fish.

So how can we save the agricultural world from resistant weeds and escalating herbicide use, caused by Roundup Ready GE crops?

Isn’t it great?! Now growers will be able douse vast fields of the same crop with the same TWO very toxic herbicides over and over every season, instead of just unlimited amounts of ONE very toxic herbicide over and over every season. Certainly this practice would never ever ever result in multi-resistant weeds, which would then require even MORE genetic tinkering and MORE poisons on food crops, escalating indefinitely with unlimited potential for negative health and environmental impacts.

Ha! Weeds evolving herbicide resistance: what kind of environmentalist wacko would even suggest it?!

What I especially like is how we home gardeners won’t be bothered by all those pesky beneficial insects like bees, butterflies, and ladybugs, since there will be TWICE as much poison around to kill them off. I’m also super excited about how the constant escalation of poisoning our ecosystem guarantees a complete avoidance of anything resembling sustainable agriculture in America, in the foreseeable future. Because, I mean, who’d want that?!

Congratulations, Dow and Monsanto! You have shown the world how to fail at sustainable agriculture, ecology, evolutionary biology, and common sense — all in one fell swoop.

No Steps Up and Two Steps Back

Authors conclude that ‘stacked resistance’ is likely to simply produce multi-resistant weeds, with continued escalation of herbicide and neglect of agroecological strategies that could provide lasting success in weed management. In other words, at best it’s a high-damage short-term fix, actively undermining development of more sustainable agricultural practices for long-term solutions.

If you’ve watched the USDA’s bad-joke-like nonregulation of GE crops to date, their likely response won’t surprise you. According to reports,

The USDA, for its part, is buying what Dow is selling. Its Draft Environmental Assessment(PDF) offers no critique of Dow’s claims, and recommends that the product be deregulated. The agency is currently seeking public comment on the matter; the comment period ends February 27. Doug Gurian-Sherman, a senior scientist with the Union of Concerned Scientists, told me that when the USDA brings a GMO product to the comment stage after having recommended deregulation, it “almost always” green-lights the product. “The only times I’ve seen the USDA hold off at this stage is when there’s a lot of public pushback,” Gurian-Sherman says.

Ok, public: you heard the man. Push back! Because with stacked resistance to Roundup and 2,4-D, Monsanto and Dow have come up with the very opposite of a good idea.