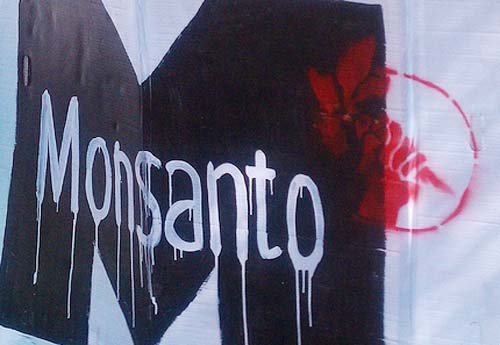 In a newly released report, UCS makes the case that the biotech monolith’s advertising stands in marked contrast to observable sustainability problems caused by Monsanto’s products. Saying ‘Yay for Sustainable Agriculture!’ simply doesn’t cut it. The proof’s in the pudding, as they say– or rather, in the pesticides.

And these factors must be considered long-term rather than short-term pursuits.

The UCS argues that Monsanto’s products — and the overly aggressive marketing of these products, to the point of antitrust investigation — has failed to facilitate sustainable agricultural practices, and has instead actually slowed progress toward the goal of sustainable food production.

In their blistering report, the USC claims Monsanto has earned a sustainability ‘F’ at least eight times over, by

These “superweeds” are causing huge problems for U.S. farmers, especially in the Southeast (but also spreading in the Midwest), where some of these weeds cannot be effectively or economically controlled. The impact on cotton production has led one scientist to compare a glyphosate-resistant weed to the notorious boll weevil, which devastated cotton production across the American South in the 1920s.

In response, farmers are increasing their overall herbicide use (see #2) and in some cases, returning to heavy tillage (plowing), which can increase soil erosion—thus reducing two of the sustainability benefits claimed for the Roundup Ready system.

2. Increasing herbicide use, with ever-escalating pollution from glyphosate and other even harsher (and more volatile) toxins.

…the number and extent of resistant weeds have increased dramatically over the past decade. At the same time, some Roundup-susceptible weeds have been replaced by weeds inherently less easy to control with glyphosate. The result has been an increase in overall herbicide use—recently estimated at about 383 million pounds higher than would have been the case without Roundup Ready crops.

The history of genetically engineered crops shows that it is not a matter of whether they will contaminate other farmers’ crops, but when and how much. Monsanto jeopardizes the future of the fast-growing non-GE and organic food sectors—and the environmental benefits they provide—by threatening the purity of their products through gene contamination.

n a 2004 pilot study, UCS tested samples of conventional (non-GE) corn, soy, and canola seed and found low-level but pervasive contamination with DNA derived from GE varieties. Some 50 percent of the corn and soybean samples and more than 80 percent of the canola samples were contaminated, with Monsanto’s genes detected in all three crops.

4. Expanding reliance on monocultures of a small number of commodity crops, decreasing biodiversity.

Large-acreage field crops—corn, cotton, soybeans, canola, and now alfalfa—make up the bulk of Monsanto’s products, in part because of the high cost of developing engineered traits. And the approach to agriculture that this product line encourages—monoculture, the production of only one crop in a field year after year—is not a sustainable one.

Monsanto’s single-minded emphasis on GE fixes for farming challenges may come at the expense of cheaper, more effective solutions… Monsanto’s extensive advocacy of engineered crops marginalizes [approaches such as classical breeding, cover cropping, and crop rotation] despite their lower cost for purchased inputs like fertilizer and pesticides and their often superior results. A recent industry-sponsored survey found that the average cost for developing a new engineered trait is about $136 million, while a typical classically-bred trait in corn has been estimated to cost just $1 million.

Monsanto routinely applies its practically limitless bankroll to food policy manipulation, in ways that at best fail to support sustainability goals and at worst — more often — actively thwart them.

In 2008—the last year a federal Farm Bill was negotiated—the company reported a whopping $8.8 million in lobbying expenditures (see table below)intended to influence decisions in Congress, the U.S. Department of Agriculture, and other federal agencies.

Farmers and policy makers can’t make informed decisions about sustainable practices without unbiased research, which Monsanto has limited and suppressed at virtually every opportunity.

n 2009, 26 academic entomologists wrote to the U.S. Environmental Protection Agency that because patents on engineered genes do not provide for independent non-commercial research, they could not perform adequate research on these crops. “No truly independent research can be legally conducted on many critical questions involving these crops,” they wrote.

A Purdue University entomologist who signed the letter put it more succinctly to a reporter for a scientific journal: “Industry is completely driving the bus.”

8. Falling short on its promise to decrease world hunger.

This prescription was written for the large industrial monocultures of the midwestern United States. This approach is likely to remain highly dependent on fossil fuel-based fertilizer and pesticides at the expense of regional biodiversity. And because it is very capital- and machinery-intensive, it is not viable for many small, poor farmers around the world.

On the other hand, data show that small farms can be more productive per acre than large ones on an overall (rather than single-crop) basis. In addition, many agroecological approaches outperform more expensive GE approaches…

Sorry, Monsanto: you’re going to have to do more than just talk about sustainability! Let’s see you buckle down and apply yourself: if you can bring these grades up, fine. If not… well, let’s just say some of us wouldn’t mind seeing you expelled for bad behavior!