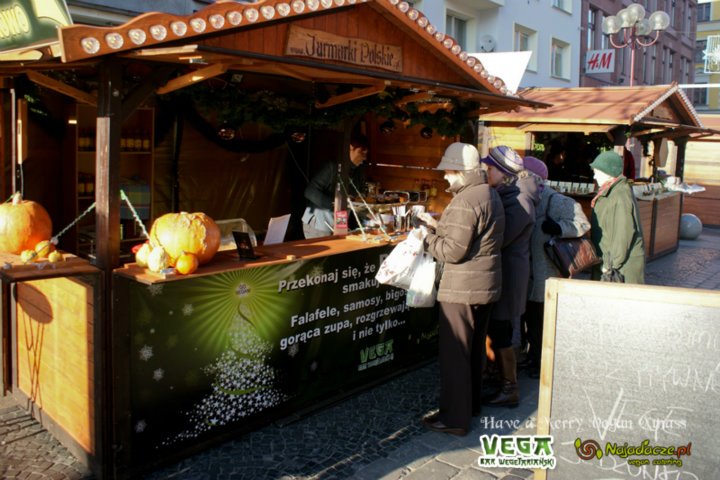 Every year, from the end of November until Christmas Eve, a large Christmas market is set up in the center of Wrocław, Poland. It includes tons of little stalls selling handmade toys, handmade crafts of various sorts, clothes, food, drinks, sweets, etc. As far as the ready-to-eat food goes, there generally aren’t many options for vegetarians, let alone vegans. This year, however, things were different….

Najadacze, a new vegan catering company in the city, and Vega, a vegetarian and vegan restaurant that’s been located in the center of Wrocław since 1987, had a joint stall with a lot of different vegan options.

The video below (in Polish, except for my interview), made by the folks at Najadacze, can give you a better picture of all this. It starts off by highlighting the numerous meat-focused stalls in the market. Then, it gets to the vegan stall, where it features a number of short interviews with customers there. As you can see, I’m the first customer interviewed. (In the first, rather inaudible clip, I was asking, jokingly, about ordering 30 tortillas to go, since it was my last night at the stall and I couldn’t imagine not having any more of their tortillas in the coming months.)

Again, there were many good options to choose from at the stall. We tried and loved the pumpkin soup, cutlets of various sorts (I think the ones we had were spinach & potato, millet, and carrot & millet… but I could be wrong), vegan bigos, carrot cake, pumpkin cake, falafels, hummus, and samosas.

But our favorite option of all was a falafel-hummus-veggie tortilla (mentioned above). I must have got it about 10 times. Aside from the fresh veggies, falafels (made right there), and hummus, the tortillas also included a garlic sauce and spicy chili sauce. The tortillas were extremely addictive  — I think it was something in the chili sauce, but could have just been the combination of everything all together. We decided early on that my Christmas present would be eating there any time I wanted — which I did. :D The stall was just outside the English school where I teach, so we were there often.

If you ever want to come visit Wrocław, make sure to get  in touch so that we can order some good vegan food from Najadacze and have a meal or two at Vega together. :D

The picture at the top is from the Najadacze Facebook page (I imagine they’d appreciate a ‘like’, especially from those living in or thinking of visiting Wrocław).