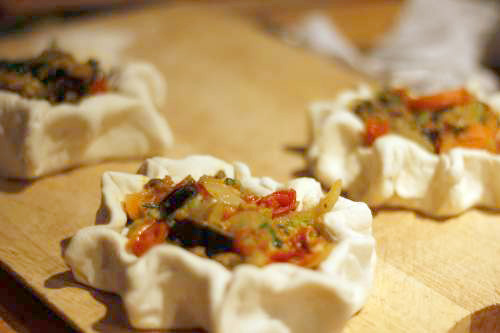 The Big Vegan is more than just a vegan cookbook. While it has an arsenal of recipes that will satisfy long time vegans, perhaps more noteworthy is the treatment it gives to the material for new vegans or the vegan-curious.

The introduction educates people trying out a new vegan lifestyle, whether it’s for health or the environment. It includes information on what veganism means and vegan nutrition. There is also a chapter on vegan kitchen staples, which will help new vegans equip their pantries.

There is no shortage of recipes in the Big Vegan. It includes recipes for breakfasts, sauces and condiments, appetizers, salads, soup, sides, main dishes and desserts.

The recipes will suit a variety of tastes. Many cultures are represented in the cuisine, so you won’t be bored. There are simple dishes like pizzas and sandwiches to more complicated vegetable pastry tarts with recipes for the pastry.

Some of the recipe call for somewhat obscure ingredients (like yucca, which I would never find in Oxford), but that keeps it interesting. Most recipes are within reach of a typical, but curious, cook.

Most do not require substitute meat, but several do. Fake meat can be a touchy subject among vegans; however, there are recipes in the front of the book for making your own, so you do not have to rely on store bought substitute meat. I am typically not a substitute meat fan, but the recipes for the fake meat sound wholesome.

The recipes have good descriptions and the directions are easy to follow. The ingredients are clearly listed in both US and metric measurements. One downfall is that it doesn’t give an estimate of how long the recipe will take, so read carefully before you dive in, but it does tell you how many servings it will make, which is quite helpful.

The book is beautiful and has the colour scheme of an artichoke. It’s easy to navigate and read. It could do with some additional photos of the dishes, but I suppose that would have made the book quite expensive (it’s a bargain!). The photos that are in the book are in full colour and beautiful.

For a Christmas party, I made a Leek-Potato soup and Individual Provencal Vegetable Tarts (pictured). They were both a hit! The leek-potato soup was thick, creamy and filling. The vegetable tarts had a great balance of flavour, and looked adorable.

The Leek-Potato soup recipe is at the end of the post, and I’ll post the vegetable tarts recipe later in the week.

How to buy it

The Big Vegan would make a great Christmas gift for someone looking to try out some vegan recipes, or for a long standing vegan looking to expand their horizons.

It is available on Amazon for $19 in the US and £15 in the UK (at the time of writing) and is also available for the Kindle.

You can check out the author’s webpage here.