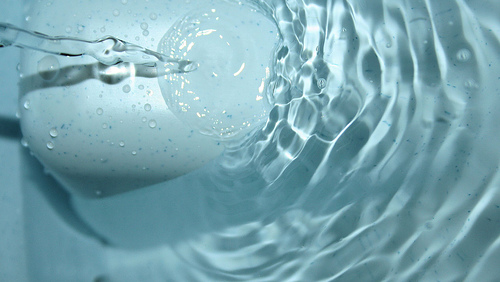 “If you want to understand all that is wrong with our government’s environmental safety priorities, you need only look at the sad story of the weed killer atrazine. Despite the fact that study after study has demonstrated its dangers, it remains one of the most commonly used herbicides in the U.S. — to the tune of 76 million pounds a year.”

That was a nice intro to a post on Grist recently (on atrazine) that I thought had some info worth sharing here on Eat Drink Better.

Atrazine, last I heard, is the second-most-widely-used agricultural herbicide in the U.S. (Note: the European Union banned it in 2004.) “The National Resource Defense Council (NRDC) found atrazine present in ’75 percent of stream water and about 40 percent of all groundwater samples,’ as well as 90 percent of tap water sampled,” Jennifer Lance reported last year on sister site Blue Living Ideas. What’s the big deal?… I mean, what’s wrong with atrazine?

Atrazine can easily leak into groundwater and spread via the air. It is commonly detectable in drinking water supplies in the Midwest (but also around the country) and Tom Laskawy of Grist notes, “I know a Midwesterner who will proudly declare — tongue firmly in cheek — ‘we Iowans drink atrazine for breakfast!'”

Atrazine, a known endocrine disruptor, has a record for:

And two recent studies, as well as an EPA review of the weed killer, bring home the point (that atrazine should not be used in the U.S. any more). More on these studies from Laskawy’s piece:

The first, appearing in the Journal of Steroid Biochemistry and Molecular Biology, is a review by a team of 22 international scientists examining a broad range of studies conducted in the laboratory and in the field that examines atrazine’s status as an endocrine disruptor in mammals, fish, and amphibians. Their analysis confirmed that atrazine is dangerous at levels the EPA considers “safe.” Dangerous how? Like this (via ScienceDaily):

“… Atrazine exposure can change the expression of genes involved in hormone signaling, interfere with metamorphosis, inhibit key enzymes that control estrogen and androgen production, skew the sex ratio of wild and laboratory animals (toward female) and otherwise disrupt the normal reproductive development and functioning of males and females.”

Perhaps animal studies don’t faze you. (I mean, who cares about hermaphroditic fish or frogs that switch sexes?) Well, maybe this study, published in Environmental Research, will. Researchers from Colorado State University and the Vermont Department of Health looked at women in farm towns in Illinois and Vermont. And they found that simply drinking a couple glasses a day of tap water with detectable but low levels of atrazine was enough to disrupt a woman’s menstrual cycle and her hormone levels. According to the article in Environmental Health News:

“The women from Illinois farm towns were nearly five times more likely to report irregular periods than the Vermont women, and more than six times as likely to go more than six weeks between periods. In addition, the Illinois women had significantly lower levels of estrogen during an important part of the menstrual cycle.”

Tap water in the Illinois communities had double the concentration of atrazine in the Vermont communities’ water. Nevertheless, the water in both states was far below the federal drinking water standard currently enforced by the U.S. Environmental Protection Agency.

And the more glasses of water the women drank, the more screwed up their hormones became.

Now, the EPA is in the midst of a review of atrazine’s safety — and the reality of the chemical’s toxicity is leaking out. As Mother Jones noted, an independent panel convened by the agency to examine the herbicide’s cancer risk provided “a list of cancers for which there is ‘suggestive evidence of carcinogenic potential’: ovarian cancer, non-Hodgkin’s lymphoma, hairy-cell leukemia, and thyroid cancer” — with the evidence for a connection to thyroid cancer singled out as “strong.”

Despite that evidence, however, the panel’s final statement was the milquetoast recommendation that the EPA in essence alter its atrazine warning from “unlikely to be carcinogenic to humans” to “inadequate information to assess carcinogenic potential.” Um. Really? That’s progress? Because other than that linguistic alteration, the EPA plans no action any time soon (a fact that demonstrates the massive pressure they must be under from the chemical industry).

Why is Atrazine Used in the U.S.?

Why is the weed killer still allowed in the U.S.? Well, I don’t imagine it has anything to do with the fact that Syngenta, the company that produces it, makes over $1 billion a year in profits and has spent up to $4.36 million a year lobbying the government.

And I doubt it has anything to do with the fact that “the EPA relied heavily on Syngenta-funded research to establish the safety of the herbicide.”

Want atrazine in your drinking water? Take a moment to add your name to a petition to the EPA to ban it!

There are more EPA contact options when it comes to the topic of pesticides, too. I imagine everything is worth a shot.