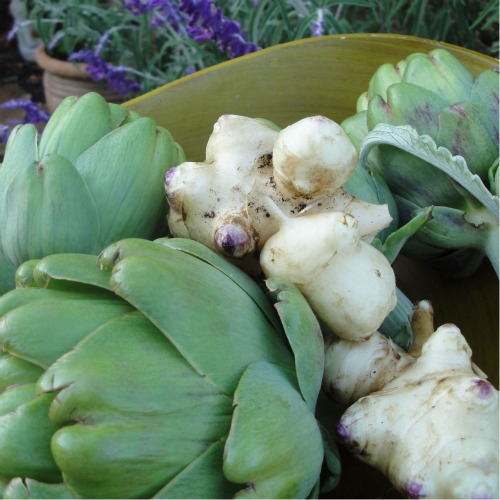 Jerusalem Artichokes, or Sunchokes, are native to North America and were first eaten by Native Americans. They were introduced into to Europe by Samuel de Champlain in the 1600’s and are known as topinambour by the French and Belgians, and remembered as a food source there during World War II (hence they are reminders of a time of hardship and food shortages).

You can find them at farmer’s markets and grocery stores, but if you want a ready supply throughout the fall and winter try growing them yourself. If you like the mild nutty taste,  they are great addition to your edible landscape as they are easy to grow. They don’t require a large space and make pretty clusters of showy sunflowers.  Just a few plants produce lots of tubers to harvest in the fall.

The tubers are crispy when eaten raw in salads and have a texture similar to water chestnuts.  They can also be cooked like potatoes: pureed into a soup, mashed, roasted, or sautéed.

Try them sautéed in olive oil with mushrooms and chopped garlic for a quick and simple dish. We loved the creamy texture and earthy flavor; the addition of brown mushrooms makes for a savory combination that will go well on its own or as a side dish.

To Prepare Sunchokes for Cooking:

Scrub any remaining soil off of the tubers with a vegetable brush under running water.  If you have trouble cleaning between the bumby parts just break them up. You can peel some of the thin skin off but don’t worry about getting it all. Slice the tubers about 1/4 inch thick.

To Sautée the Sunchokes:

Warm up some olive oil in a skillet. Add the Sunchoke slices and cook on medium  to low heat so that they don’t burn- stir occasionally and cook for about 10- 15 minutes. Add chopped garlic and sliced brown or white button mushrooms as the Sunchokes begin to soften. Season with salt and pepper. As the mushrooms become cooked thoroughly, test a piece of Sunchoke to see if it is done- it should be soft. You can cook them a bit longer if you like them creamier, or serve them while they are still bit firm.

Serve warm with a sprinkle of chopped fresh parsley. This dish is a great accompaniment to other winter vegetables such as baked squash.

Sunchokes are a fall season vegetable so we had bought some at a local Whole Foods Market last October (check your farmer’s market too) and saved them for planting the following spring. I stored them in a pot on my porch in potting soil over the winter, protected from frost. I planted a couple of the tubers in the spring on the sunny side of our house where we had sheet composted to build up the soil over the winter.

When Spring came I began watering the pot until the plants emerged, then planted them into the ground about an inch deep in the loamy soil. The plants grew rapidly all during the summer until they reached a stunning 12 feet in height! They finally began flowering in August.

Be sure to plant them in full sun and water them regularly. The tubers spread underground rapidly so plant them where you can easily dig them up and leave only a few for the next season’s crop so they don’t overwhelm your garden.

The tubers can be harvested in the fall when the plants begin dying back. They seem to keep very well in the soil (in the SF Bay Area) and we dig up only what we need for the day’s meal using only our hands, so they don’t get damaged. If you live where the ground freezes during the winter you’ll have to mulch them heavily or harvest them and store as you would other root vegetables.

Do you have tips for eating Sunchokes? Please share them here by posting a comment- I’d love to hear from you (we still have a couple of pounds worth of Sunchokes to harvest!).