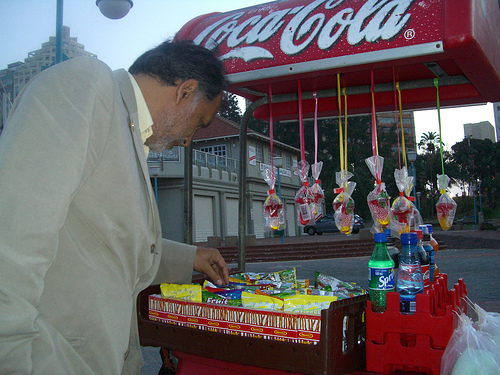 The wonderful potential of corporate globalization. Rich corporations that have compromised the health of people living in rich countries can now do so in the developing world, as well.

“Diabetes, obesity and heart disease rates are soaring in developing countries, as multinationals find new ways of selling processed food to the poor,” the Guardian reports.

Who are the culprits? I’m sure these aren’t the only ones, but here are a few:

Nestlé is using a floating supermarket to take its products to remote communities in the Amazon. Unilever has a small army of door-to-door vendors selling to low-income villages in India and west and east Africa. The brewer SABMiller has developed cheap beers in some African countries as part of a “price ladder” to its premium lager brands, and, as a leading Coca-Cola bottler and distributor, is aiming to double fizzy drinks sales in South African townships.

Only live on $2 a day? No worries! Our infinitely wise politicians and administrators in the developed world have made processed junk food that will kill you cheaper than whole foods!

Despite still struggling with malnutrition, many less affluent countries are starting to or will have to also deal with obesity and related health diseases.

In South Africa, about a quarter of schoolchildren are now obese or overweight, as are 60% of women and 31% of men. Diabetes rates are soaring. Yet, nearly 20% of children aged one to nine have stunted growth, having suffered the kind of long-term malnutrition that leaves irreversible damage.

And, sadly, these problems can exist in the same home. Researchers note that cheap junk food used instead of healthier, more expensive real food can result in malnutrition, obesity, and diabetes.

“It’s not a case of having massive starvation on one end of the spectrum, and gluttony on the other,”  Leonie Joubert, a criminology researcher and author of a forthcoming book on food security, said. “We have this kind of ‘hidden hunger’, almost pervasive in poorer communities where it’s easy to fill the hole in one’s belly with low-nutrient, cheap, empty-calorie foods to satisfy one’s hunger now, but not meet the body’s long-term nutritional needs.”

For much more on all this, including possible solutions, check out the Guardian’s full story.