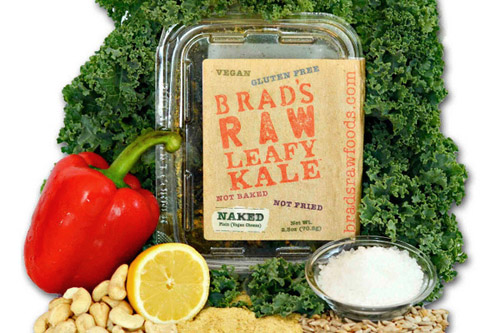 Folks who know me well know that I am crazy for kale! It’s my favorite vegetable, and I’m even growing kale in my fall garden. So, when the folks at Brad’s Raw Foods contacted me about sampling their raw kale chips, I jumped at the chance.

I was not expecting the bounty of raw chip goodness that arrived on my doorstep a week or so later. It was a huge box full of 3 boxes each of their leafy kale chip varieties and 1 bag each of their gluten free raw chips. The kale chips came in 3 flavors:

The raw chips they sent were:

The raw leafy kale chips reminded me a lot of kale chips you’d make in the oven, but they make theirs by dehydrating their kale. If you’re a fan of nutritional yeast, these chips are the bomb! I devoured all 12 boxes and didn’t share any even with my friends. Sorry, friends!

My only complaint about the leafy chips is that they are very fragile. I was only really able to snack on about half the box, because the rest turned to shake. Luckily, that crumbly, raw kale is great mixed into soups, sprinkled on salad, or mixed with pasta or potatoes. I did not waste a single kale crumb.

I have to admit that I was not nuts about the raw chips. The red pepper was my favorite of the three, but even those I probably wouldn’t pick up at the store. They were much better dipped in hummus or pesto, but on their own I found them a little bit flat.

The one way I really dug them was in vegan nachos – covered in vegan cheese, then baked in the toaster oven until they start to brown ever so slightly. That sort of ruins the whole raw appeal of these chips, but they were pretty tasty when they were toasted.

You can find Brad’s Raw Foods on their website, and I’ve seen their stuff at Whole Foods from time to time, as well.