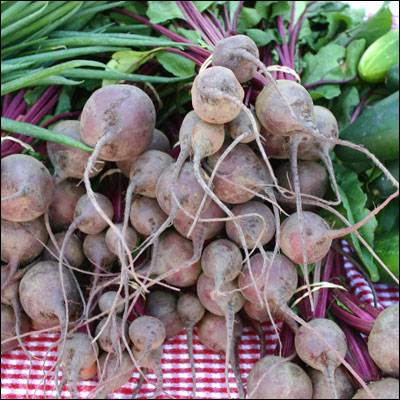 Beets are something I grew up with, particularly my grandmother’s pickled beets. Pickled beets are OK, but since moving to England, I am coming around to roasted beets.

They have a nice, comforting and sweet taste and are easy to make.

How to roast a beet

Start by cutting most of the stalk off and washing the beet. You don’t have to peel it. The skin comes off very nicely after roasting.

In a roasting pan, toss the beets with a little bit of olive oil, salt and pepper. Roast for about 45 minutes until soft.
After they cool, the skin and stalk will peel away easily.

What to do with them

Beets go really well with bitter greens such as arugula. Add them to a salads or sandwichs. They can also be served with a little bit of olive oil as a side on their own.
…
Photo: Flickr Creative Commons by La Grande Farmers’ Market