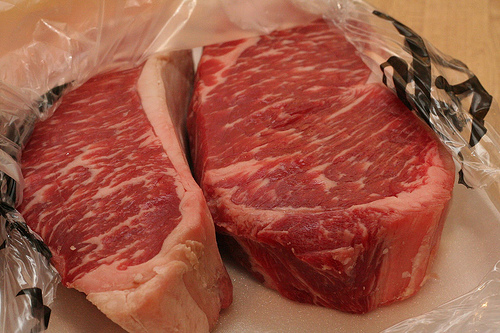 Global meat production and consumption have increased rapidly in recent decades, with harmful effects on the environment and public health as well as on the economy

Worldwide meat production has tripled over the last four decades and increased 20 percent in just the last 10 years, according to research done by Worldwatch Institute’s Nourishing the Planet project for Vital Signs Online. Meanwhile, industrial countries are consuming growing amounts of meat, nearly double the quantity in developing countries.

Mass quantities of antibiotics are used on livestock to reduce the impact of disease, contributing to antibiotic resistance in animals and humans alike. Worldwide, 80 percent of all antibiotics sold in 2009 were used on livestock and poultry, compared to only 20 percent used for human illnesses. Antibiotics that are present in animal waste leach into the environment and contaminate water and food crops, posing a serious threat to public health.

The amount of meat in people’s diets has an impact on human health as well. Eaten in moderation, meat is a good source of protein and of important vitamins and nutrients such as iron, zinc, and vitamins B3, B6, and B12. But a diet high in red and processed meats can lead to a host of health problems, including obesity, diabetes, cardiovascular disease, and cancer.

Eating organic, pasture-raised livestock can alleviate chronic health problems and improve the environment. Grass-fed beef contains less fat and more nutrients than its factory-farmed counterpart and reduces the risk of disease and exposure to toxic chemicals. Well-managed pasture systems can improve carbon sequestration, reducing the impact of livestock on the planet. And the use of fewer energy-intensive inputs conserves soil, reduces pollution and erosion, and preserves biodiversity.

Further Highlights from the Research