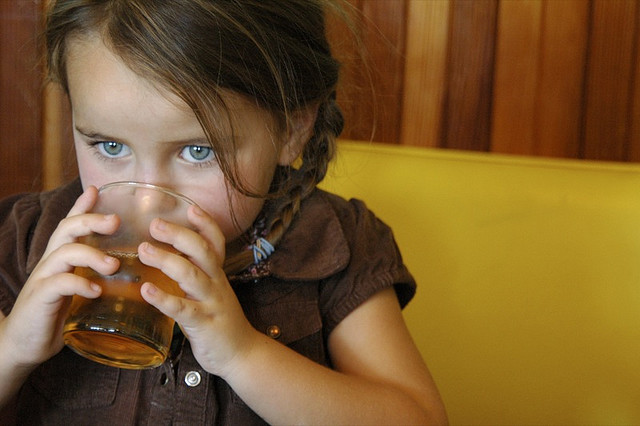 No vitamins. No fiber. A bit of potassium, and a whole lot of carbohydrates. While the Mott’s label here says 0g of sugars, other nutrition resources say otherwise. According to Self Nutrition Data, an 8oz serving of apple juice contains 114 calories and 24g of sugar. That’s only 3g less than in the same amount of Coca Cola! Here’s nutritional information for an 8oz. Coca-Cola, from the Coke website:

It’s a little bit hard to read, but it says there that 8oz of Coke contains 27g of sugar. Apple juice is basically un-carbonated soda with a little bit of potassium thrown in. Kids are better off getting potassium from a banana or at least eating apple sauce, which still has some of the fiber from the fruit in it.

I’m not saying that we should completely deny our kids apple juice, if they love it. But maybe it should be more of a sometimes drink. With childhood obesity on the rise, I think it’s more important than ever that we’re careful about our kids developing a sweet tooth and that we encourage them to hydrate with plain old water.

What do you guys think about apple juice? Do you give it to your kids? If so, how often?