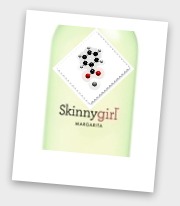 Two days ago I wrote about how Skinny Girl ‘natural’ cocktails, the fastest growing spirit brand in America and the brain child of Bethenny Frankel of the Real Housewives of New York City, had been pulled off the shelves of the twelve or so Whole Foods Markets that were carrying it after they learned that the natural ingredients are not so natural. Information was scant and it smelled of greenwash.

Today, Whole Foods confirmed via email that that Skinny Girl cocktails ‘did not meet their quality standards’ so they had to stop selling it. The offending ingredient, which is not listed on the bottles because there is no ingredient list at all, turns out to be Sodium Benzoate.

Sodium Benzoate, also called E211, is a preservative that is a common ingredient in soft drinks and has long been considered dangerous (it is also found in alcohol-based mouthwash, silver polish and and those fireworks that whistle). Not surprisingly, E211 has been known to to have a number of serious health impacts including causing:

So now the question is: What is brand owners Beam Global Spirits & Wine a unit of Fortune Brands Inc., the makers of Jim Beam, Canadian Club and Courvoisier, going to do about it?  Change the labeling?  Change the ingredients? Paula Erickson of Beam Global told me in a call, that “any product that sits on shelf” contains E211 and that since the labeling has TTB approval and ‘consumers love it’ (that’s the real issue, isn’t it?) that Beam ‘stands by the the quality of the product 100%.’

First, as the most common greenwash sin (the Sin of Vagueness) and as NaturalNews.com points out, the term ‘natural’ can mean just about anything; it has no nutritional meaning and isn’t truly regulated by the FDA. Or the TTB. Moreover, The TTB rules (pdf) on using the term ‘natural’ in marketing of spirits are virtually impossible to decipher but clearly allow for some preservatives.

Finally, Erickson also said that the cocktails are positioned as low-calorie not ‘natural.’ Is that why descriptions of the drinks include: “It only uses natural flavors,” “…with nothing artificial” and “naturally prepared”? Never mind that Bethenny is touted as “a renowned natural foods chef.”

I don’t begrudge people the right to drink anything they like. I like to drink Diet Coke. But when I do, I do so  knowing I’m swallowing a can of chemicals. But, even if (let’s hope) people are drinking Skinny Girl cocktails in moderate amounts so the E211 doesn’t hurt them much, there is still the issue of the false ‘natural’ advertising. We can’t condone corporations calling a drink ‘natural’ when its no more natural than any calorie-free soda out there. So the question remains: What is Beam Global Spirits & Wine a unit of Fortune Brands Inc. going to do about it?