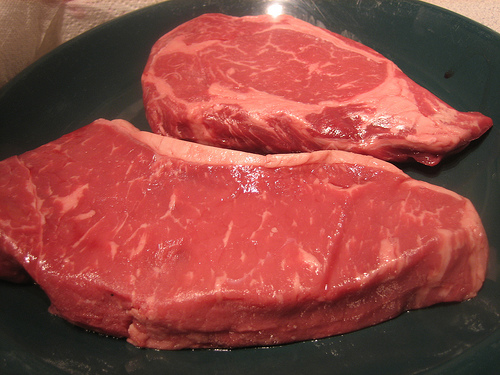 Vegans and vegetarians: Would you eat lab grown meat?

According to New Scientist, lab grown meat may be only six months away! A researcher in the Netherlands has been experimenting with pig cells and has found a way to grown muscle tissue in the lab. The pig stem cells are fed a special blend of horse fetal serum.

The tissue grown was like muscle, about 2.5 cm by 0.7 cm. The muscle-like strips are ‘exercised’ each day by using velcro to hold them down, then it is stretched, so that the tissue experiences the same stresses as actual animal muscle.

Even with exercise, the tissue looks pale compared to meat from animals because there is no blood in it to give it the color with which we are accustomed. The researchers are working on adding to the tissue the protein that gives blood its red color.

What does it taste like? Who knows. No one is allowed to consume the lab-grown meat by law (but I bet you that one of the researchers has tried it off the record.)

Looking to the future, lab grown meat could help address animal cruelty and environmental problems associated with livestock farming according to an estimate. Also, it is highly likely that if it takes off, it wouldn’t just be cows, pigs and chickens, but more exotic animal tissues could be grown as well.