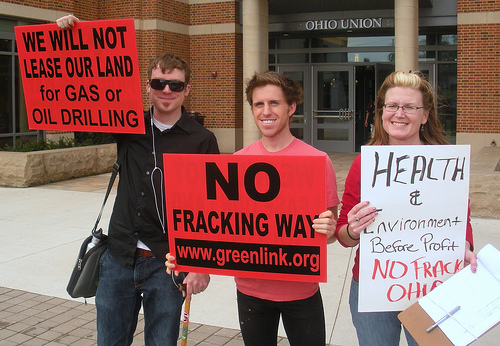 Natural gas gets a lot of press as being a clean energy solution, and in some ways that’s true. Natural gas vehicles, for example, emit far fewer emissions than traditional fossil fuel cars. The trouble with natural gas isn’t so much related to usage but to how we get that gas out of the ground in the first place.

Just like with oil, we’ve used up much of the easy-to-get-to natural gas that we know about, and that means that companies have to use more extreme measures to get at gas that’s trapped in rock deep below the surface. With oil, we’re seeing this with deepwater drilling, and with natural gas, it means the rise of a practice called Hydraulic Fracturing or “fracking” for short.

What’s so Bad About Fracking?

Hydraulic fracturing involves pumping high pressure liquid into rocks deep below the Earth’s surface to extract the gas. The problem with fracking is that the fluid contains highly toxic chemicals and heavy metals. The really scary part? Gas companies claim these fluids are proprietary, so they don’t even have to tell us what’s in them!

What we do know is that in areas where fracking is prevalent, people report high incidences of illness, and some have even been able to light their tap water on fire. This trailer for the film Gasland highlights the problem of fracking pretty succinctly:

“It’s not supposed to do that.”

What You can Do

If we want gas companies to stop fracking, we need to get heard! You can send a note to your Senator or to your Representative letting them know how you feel. Heck, send emails to both! If you’re not sure what to say, here’s a sample letter cribbed from Advocacy Writings for WCC:

I’m writing to express my concern about a threat to our clean drinking water.

Hydrofracking involves blasting a mixture of water and chemical additives horizontally through the rock formations deep under the surface of the earth in order to break up the rock and create a conduit for natural gas to flow out.  Millions of gallons of water are required, and many of the chemicals used are toxic to the environment and to human health.  Worse still, large sections of the proposed drilling areas underlie watersheds that supply New Yorkers with drinking water.

Because of the dangers associated with this new and under-researched drilling method, the WCC supports not only the newly-enacted New York state moratorium on hydraulic fracturing through July of 2011 but also a broader suspension of fracking permits until the public can be assured of an environmentally sound drilling process.  A moratorium should certainly be in place until the EPA completes its in-depth investigation of hydrofracking, an investigation that surely cannot be completed by July.  The public also deserves absolute assurance that chemicals will not be injected into the rock formations that underlie our drinking water.

If an environmentally sound method of natural gas drilling does not yet exist, the gas industry should be sent back to the drawing board to develop one.  For now, it is up to all of us, and to our politicians in particular, to hold industry responsible for its actions.  The DCS, DRN and DRBC are already leading the way by standing up for the environment and public health against the serious threats posed by hydrofracking and other experimental drilling.  The WCC wholly supports these efforts.

Have you guys reached out to your representatives about this before? I’d love to hear what response you got!