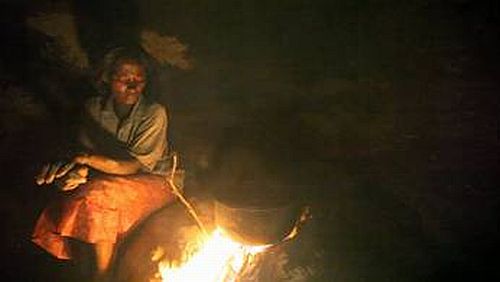 Part two of the Paradigm Project’s reality webseries Stove Man is online. In it, Greg and Austin try to cook over an open fire the traditional Kenyan way.

In the first episode, Greg and Austin spent a day with the women of the Gabbra in Kenya gathering wood and carrying it back to the village.

In the second episode, Greg and Austin travel to a village at night and ask if they can cook over the fire. The open fire is inside a hut. Smoke billows out of the doorway. The guys cry all the way through the cooking exercise and Austin’s glasses are covered with soot.

The tremendous difficulty Greg and Austin experience just to cook a pot of rice is something women in much of the world have to do every day. It really brings home the need for cookstoves.

The Paradigm Project was founded in 2008 to provide cookstoves to as many people as possible. The cookstoves will save families money and time – an estimated 35% of their annual income and over thirty-five hours a week is spent collecting wood and cooking over an open fire.

Image by the Paradigm Project, used with permission.