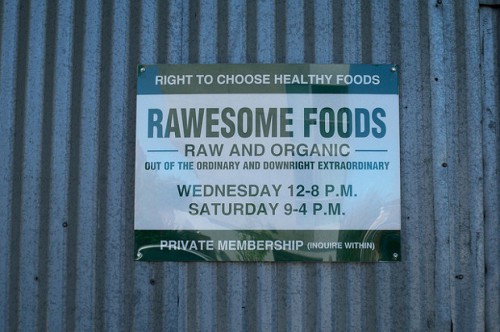 “A multi-agency SWAT-style armed raid was conducted this morning by helmet-wearing, gun-carrying enforcement agents from the LA County Sheriff’s Office, the FDA, the Dept. of Agriculture and the CDC (Centers for Disease Control),” Mike Adams of Natural News reported yesterday.

Thank you to all those wonderful agencies for doing such great work. (Sarcasm.)

Note that Rawesome is a “private buying club” that does not sell its product to the masses but only to people who agree to take responsibility for their own health into their hands. So,.. how is it even a public threat in any way, even if you consider raw milk and cheese potentially harmful to your health? (Which doesn’t seem to be proven.)

James Stewart, the founder of Rawesome and “a pioneer in bringing wholesome raw foods directly to consumers through a buying club,” as Adams writes, “was followed from his private residence by law enforcement, and when he entered his store, the raid was launched.” He is reportedly being held on $123,000 bail and cannot use bail bonds. Furthermore, if he does come up with the cash, they’ve demanded he disclose where he got the money from. (Illegal.)

Here are more details from Adams:

James was handcuffed, was never read his rights and was stuffed into an unmarked car. While agents said they would leave behind a warrant, no one has yet had any opportunity to even see if such a warrant exists or if it is a complete warrant.

Law enforcement then proceeded to destroy the inventory of the story by pouring the milk down the drain and / or confiscating raw cheese and fresh produce for destruction.

One report says that $10,000 worth of raw milk were dumped down the drain.

Video of this year’s raid:

In addition to Stewart’s arrest, 2 more were arrested in raids of Rawesome and Healthy Family Farms — Sharon Palmer (of Healthy Family Farms) and Victoria Bloch (the local L.A. co-chapter leader for the Weston A. Price foundation) — following the 21-page complaint that led to the raids. Palmer’s bail bond is recommended at $121,000 and Bloch’s at $60,000.

This seem totally beyond what is at all legal for law enforcement agencies to do in such a situation? It sure does to me. And Mike Adams writes: “We believe this was an ILLEGAL raid being conducted mob-style by government thugs who respect no law and no rights.This is an all-out war by the government against people who try to promote healthy raw and living foods.”

Mass protests and direct action are needed right now to get the injustice of all this enough coverage to make a difference. And they are sorely needed not only for this case but for any future cases like it. Stay tuned for more info on those or send us a comment or email if you are organizing one. One that has been arranged in L.A. for this morning is as follows:

There will be a formal public protest at tomorrow’s arraignment hearings. If you live in Los Angeles, show up on the morning of 8/4 at Los Angeles Superior Court, Criminal Justice Center, 210 W. Temple St., Los Angeles. Court opens at 8:30 a.m., so organizers are asking protesters to arrive at 7:45am.

Also, go to www.ConsumerWellness.org if you want to make a donation to Stewart’s legal defense fund. 100% of donations given are going towards that.