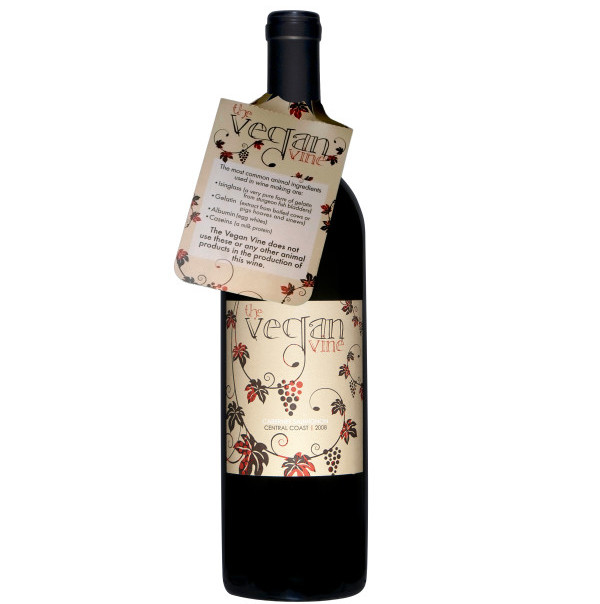 Who knew? According to Clos LaChance Winery, the producers of  a new wine, The Vegan Vine, the use of animal byproducts is common in the wine filtration process. Cheryl Durzy, co-founder of The Vegan Vine and Vice President of Sales and Marketing for Clos LaChance says:

“Because the core ingredient in wine is grapes, many people do not realize that a number of animal products are often used in the winemaking process…Most of Clos LaChance’s Wines were vegan anyways, but it was not something we could legally explain on the bottle due to TTB regulations. Therefore, the concept of The Vegan Vine was born!”

According to Clos LaChance animal products such as isinglass (from sturgeon fish bladder), gelatin, egg whites, and casein (a milk protein), are used as processing aids while fining wines to help remove solids. Although typically filtered out of the wine before it is sold, the use of these animal ingredients makes many wines unsuitable for vegans. The Vegan Vine avoids animal products by allowing the wines to naturally settle out the undesirable particles. Instead of animal products, the winery uses bentonite (a clay product), sodium bitartrate and ‘sterile filtering’ to remove solids from their wines.

It turns out that there are a number of vegan wines on the market. VeganConnection.com says: “Finding wine that has not been filtered through animal products can be difficult.  The most accurate way to find out if a wine is acceptable to you is to contact the winery and ask specifically what is used in the fining process.”  If contacting the winery seems like too much hassle you can consult the Vegan Wine Guide that lists 428 vegan wines (only 38 come from California and Vegan Vine is not yet included).

But, to me, the real question is how does it taste. The first three  three wine selection come from Clos LaChance’s Estate Vineyards in the Northern Central Coast and include a Cabernet Sauvignon, a Sauvignon Blanc and a Red Wine blend (38% Merlot, 16% Cabernet Sauvignon, 16% Petite Verdot, 16% Cabernet Franc, 10% Zinfandel, 2% Cinsaut, 1% Carignan, 1% Mouvedre). While I have yet to taste any of them, Druzy swears by her new wines and points out that the Cabernet already  scored a silver medal in the Los Angeles International Wine Competition. As an added bonus, Vegan Vine wines are made in accordance with the policies of the California Sustainable Winegrowing Alliance and bottled in eco-glass that is 25% lighter than regular wine bottles.