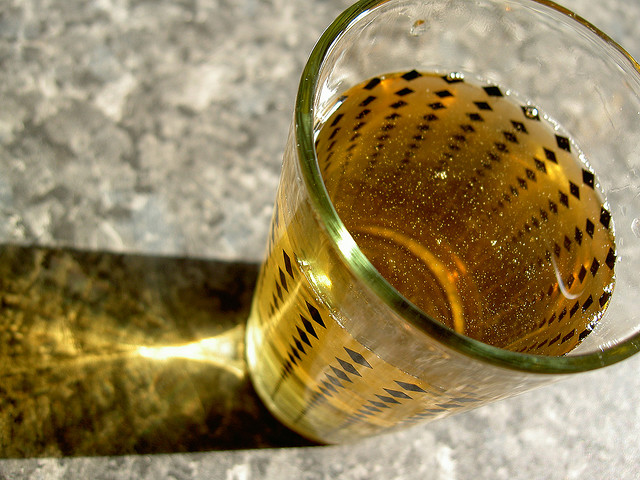 While the EPA limits arsenic in our drinking water to 10 parts per billion, recent tests have found the amount of arsenic in apple juice (Mott’s Apple Juice, in particular) to be 55 parts per billion — 5.5 times more than what the EPA will let us drink! The FDA does not regulate arsenic in juice at all, unfortunately. However, as a result of this finding and recent research it has conducted on food imports in the U.S., Food & Water Watch is pushing this government agency to start doing so.

Where is the arsenic coming from?

Well, the answer to that question is very likely China.

Apparently, arsenic has been found in U.S. juice before, as well, and Food & Water Watch is saying “it’s past time” for the FDA to start regulating this toxic substance in juice.

Of course, Food and Water Watch — which has found numerous, systemic problems with food and juice imports from China — is also pushing the government to improve its regulation of Chinese imports, starting with regulation of apple juice imported from China.

“Our next safety scare could come compliments of China,” says Food & Water Watch executive director Wenonah Hauter. “Given how pervasive poorly regulated Chinese food exports are in our food supply, the FDA has a responsibility to focus its attention on imported foods, especially those that are most often eaten by children. Setting a limit for arsenic in apple juice would be a good place to start.”

The Empire State Consumer Project, which commissioned the arsenic testing above, and Food & Water Watch have sent a letter to the FDA along these lines, and “the lab report outlining the heavy metals tested for in several brands of apple juice, can be found here.”

Additionally, if you want to delve further into food imports from China, check out: A Decade of Dangerous Food Imports from China. As a short summary, the report found that many common foods in the U.S. come from China and “China’s food exports to the U.S. have tripled over the past decade to nearly 4 billion pounds of food in 2010, worth nearly $5 billion.” And it found that while the FDA kept 9,000 “unsafe products” out of the U.S. from 2006 to 2010, less than 2% of imported food is actually inspected. Concerning?

If you want to help push for FDA regulation of arsenic in juice, you might contact Anna Ghosh — aghosh(at)fwwatch(dot)org, 415-293-9905.