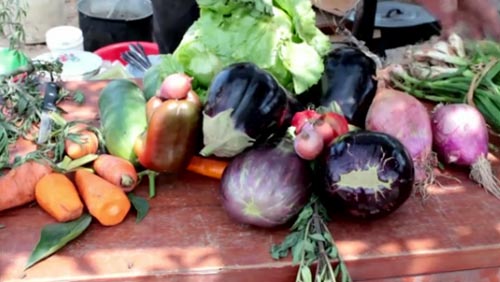 Karney Hatch, creator of the film “Plant This Movie,” talks about the importance of urban agriculture to our food future.

At a powwow in Mexico in 2008, I had the good fortune of spending some time with a Nahua medicine man. He used his grandson as an interpreter from Spanish to his native Nahuatl because he didn’t speak much Spanish. A neo-hippy from Mexico City asked him about 2012. The medicine man mostly laughed off the question (his ancestors were Aztecs, not Mayans), but he did say that the Mayans never said that 2012 would be the end of the world, it would just be the start of a new cycle.

It’s becoming obvious even to those in the mainstream that our whole way of life, from peak oil to overpopulation to petroleum-dependant agriculture, is unsustainable. Change we will, one way or another. I have a vision of Mother Nature standing over us with a scythe in her hands telling us, “Look, we can do this the easy way, or we can do this the hard way.” I am so interested in urban agriculture because I see it as one of the keys to making the transition to a more sustainable civilization the easy way, or I should say “easier way;” things are bad enough that no truly easy way remains.

This interest is due not only to urban ag’s potential to provide an abundance of nutrients and calories.

As I first learned by reading Heather Flores’ Food Not Lawns and have since learned first-hand many times, growing food where you live instantly strengthens the ties in your neighborhood and local community. You can’t help but have more contact with your neighbors when you are tending your garden than you do when you’re inside, and producing a part of your own food where you lives inspires yourself and others to think about your local environment in a new way.

Once your neighborhood and local community are flourishing because of those strengthened bonds, you have entered into a virtuous cycle. Members of that stronger community will make better decisions individually and can work together collectively to solve other problems as they arise.

Ultimately, then, urban agriculture is a part of a web of solutions that will need to be employed as the current subculture of progressives take over and become the new mainstream. When? The sooner the better – maybe even in 2012.

“Plant This Movie” will be Karney Hatch’s second feature length documentary film. You can find out more about the project at plantthismovie.com and can support it until July 16 at Kickstarter.