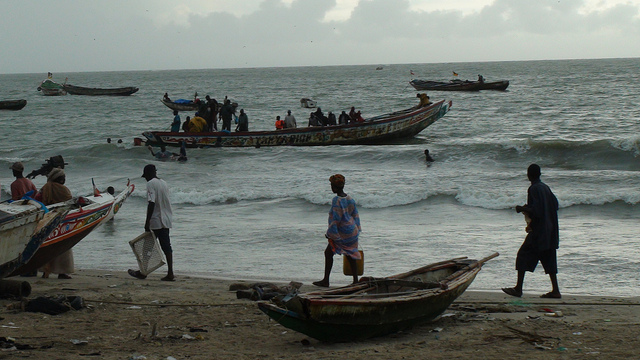 Global fish production has reached an all-time high, according to Nourishing the Planet’s latest research for the Worldwatch Institute’s Vital Signs Online publication. Aquaculture, or fish farming—once a minor contributor to total fish harvest—increased 50-fold between the 1950s and 2008 and now contributes nearly half of all fish produced worldwide.

According to U.N. Food and Agriculture Organization an estimated 53 percent of fisheries are considered fully exploited—harvested to their maximum sustainable levels—with no room for expansion in production. Population growth and a higher demand for dietary protein are putting increasing pressure on depleted stocks and threatened ecosystems.

Increased farming of large predators, such as salmon and tuna, has led to overfishing of prey fish—including anchoveta and herring, which are commonly used as fishmeal. It generally takes at least three kilograms of feed to produce one kilogram of salmon. The shrinking of the numbers of prey species threatens the entire food chain, putting further stress on large predator stocks.

Depleting fisheries also negatively affect the economies of developing countries, home to the nearly 60 percent of the world’s fishers that are classified as small-scale commercial or subsistence fishers. In Africa, an estimated 100 million people depend on fish from inland sources, such as lakes and rivers, for income as well as protein and much-needed micronutrients like vitamin A, calcium, iron, and zinc. But coastal fisheries across West Africa have declined by up to 50 percent in the last 30 years due to significant pressure from large industrial fleets.

Fisheries also provide important ecosystem services, such as storing and recycling nutrients and absorbing pollutants. We need to make ecological restoration as much a goal as meeting the growing global demand for seafood. And we must move away from mainstream approaches that focus narrowly on short-term profit and boosting production to more sustainable strategies that help meet demand and support fishing communities.

Around the world, fisheries co-managed by local authorities and fishers themselves are emerging as a promising solution to replenishing depleting fish stocks.

In 2007, a group of Gambian women oyster harvesters formed the TRY Women’s Oyster Harvesting Association. They collectively agreed to close one tributary in their oyster territories for an entire year and to shorten their harvest season by two months. These practices may seem difficult in the short run, but they pay off over time, securing incomes and nutrition in their communities.

Focusing on fisheries can help boost incomes and strengthen food security, while protecting the ecosystems on which millions of people worldwide depend.

To purchase your own copy of State of the World 2011: Innovations that Nourish the Planet, please click HERE. And to watch the one minute book trailer, click HERE.