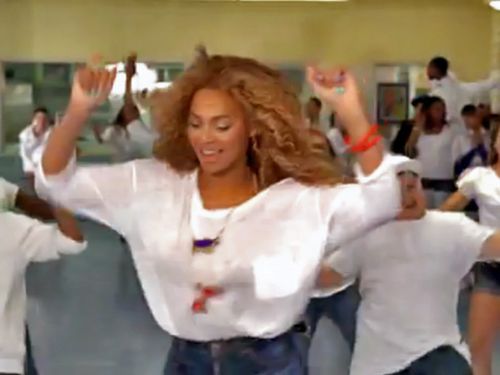 The First Lady’s “Let’s Move” initiative got a boost this week when Beyonce released her new dance video. “Move Your Body” features Beyonce dancing in a school cafeteria with students. The video will be used as part of a “Let’s Move! Flash Workout” on May 3.

The National Association of Broadcasters Education Fund (NABEF) partnered with Let’s Move to produce the video. At 1:42 p.m. Eastern time on May 3, middle schools across the country will participate in a nationwide flash workout. The goal of the NABEF is to have at least one middle school in each of 210 television markets participate. The schools’ participation would be covered by a local television station and prominent local radio personalities would also be there.

The dance routine is meant to be used for a workout and gym teachers and workout instructors (and everyone else) are encouraged to download the song not just for the nationwide flash workout, but also for classes and fun with friends.

Instructional videos for how to do the moves in the “Move Your Body” video are available in English and Spanish from NABEF’s YouTube channel.

Let’s Move is a part of First Lady Michelle Obama’s program to reduce childhood obesity, along with Let’s Cook and a general push for better school nutrition.