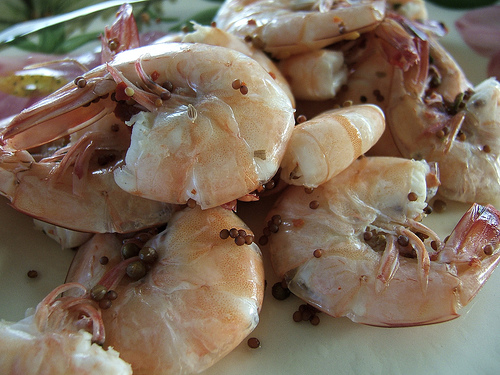 In Great Britain, it’s quite common to see food labelled ‘British fill in the blank‘. It’s a good thing, because the people know that they are buying at least reasonably local food.

However, because of loopholes in the food labelling requirements, this type of labelling can be VERY misleading.

Shrimp that are caught by British fishermen are all too often loaded onto a large ship and shipped to China where they are de-shelled by hand, then shipped back to the UK and sold with a ‘British prawns’ label.

How exactly are these prawns British when they’ve travelled about 10,000 miles?

There are little loopholes in the food labelling system.  For the prawns, meat products are not required to disclose a country of origin.

Why do companies ship to China?

To quote a director of a Scottish shrimping company:

This seems a bizarre thing to do but the reality is that the numbers don’t stack up any other way…sadly, it’s cheaper to process overseas than in the UK and companies like us are having to do this to remain competitive.

Yes, it’s cheaper to ship shrimp to China to have them shelled BY HAND than to truck them somewhere in the UK to have the shelled by machine.  This seems not just like an environmental issue, but also an ethical issue.

Are food miles the only issue when it comes to eating sustainable food?

It’s not entirely straightforward to say that just because the shrimp have travelled 10,000 miles that they necessarily have a larger carbon footprint than locally shelled shrimp.

Shipping (in actual ships) is an extremely efficient method of transportation in terms of carbon emissions. Compared to trucking, the carbon footprint of shipping via ship is about one sixth!  Compared to airline shipping, it’s nearly one fiftieth!

Depending on how the food was shipped, even the food miles can be a misleading gauge for how sustainable your food is.

The problem is with the current food labelling system and the competitive pressures companies feel; it can be nearly impossible to find truly local and sustainable food.