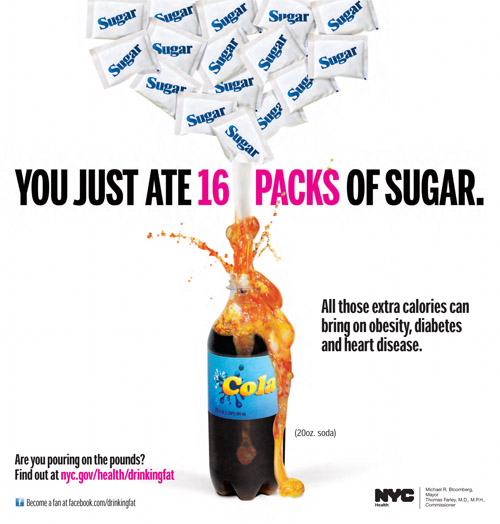 Have you seen any of the videos from New York’s new anti-soda campaign?

New York’s Department of Health is trying to fight obesity by raising awareness about the dangers of sugary drinks through a series of videos and ads around the city. Here’s one of the videos:

If you’re a regular reader here, you probably already limit the sugary beverages, and I’m interested to hear what you’re drinking instead. I start my day with unsweetened juice shots, then stick with tap water for the rest of the day, with the exception of one or two cups of coffee with almond milk in the afternoon. Once in a while, I do like to treat myself to a spicy ginger ale, but I try to limit that to once a week at the most.

Sugary drinks are linked to type 2 diabetes, and all of those extra calories contribute to obesity and obesity-related illnesses. I’m glad to see New York educating folks about the problems that come with loading up on the sugar. I thought it was a little bit odd that they suggest drinking milk as an option. Did the dairy lobby have a hand in that one, I wonder?