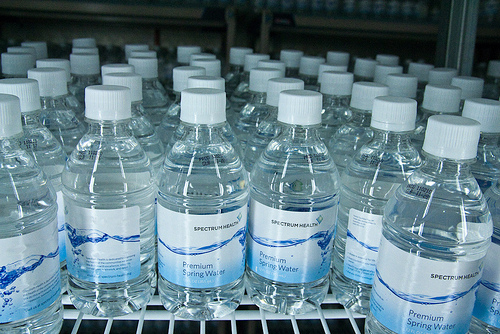 Since the news that Congress is spending nearly a million dollars a year on bottled water, a petition was started to stop this and it was delivered on Tuesday with 65,000 signatures – 50,000 of which were obtained by change.org.

Hopefully everyone who felt strongly about asking Congress to stop spending money on bottled water was able to sign the petition, but it’s not too late to tell Congress you want to eliminate bottled water purchases from the budget.  The more people that sign – the more impact it has.

Reasons you should sign the petition and reason congress should stop the habitual drinking of bottled water.

“Bottled water is an elaborate scam designed to strike fear among the public that tap water is somehow unsafe to drink. This is a real opportunity for members of Congress to step up and demonstrate their faith in public tap water systems by slashing spending on wasteful, unnecessary bottled water from their budgets.”

Sources:  Get Congress off the Bottle