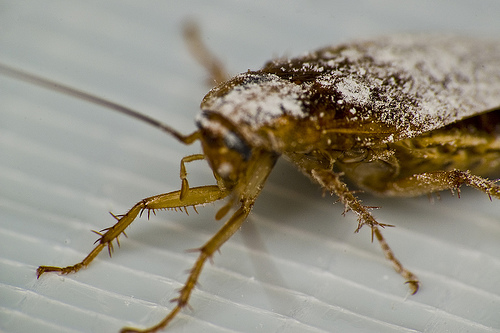 Most of you have probably already heard how excessive antibiotic use on industrial farms is breeding bacteria that are resistant to antibiotics. One such ‘superbug’ is Staphylococcus aureus, or MRSA, a multi-drug resistant species that kills 20,000 Americans every year.

Tainted meat is a well-known culprit for spreading superbugs to humans, but now there’s a new way that humans can become infected: via insects.

The researchers found that flies and cockroaches collected on industrial pig farms were infected with the same types of bacteria found in pig feces. Several strains of common gut bacteria in these insects were found to be frequently resistant to tetracycline, erythromycin, streptomycin, and kanamycin – common antibiotics used to treat human infections.

Industrial farms are breeding grounds for insects that feed on animal waste. Since flies and cockroaches are extremely mobile, they can transport antibiotic resistant bacteria from the farms to surrounding residential areas, and potentially transmit these bacteria to humans.

Image courtesy of via slinky2000 a Creative Commons license.