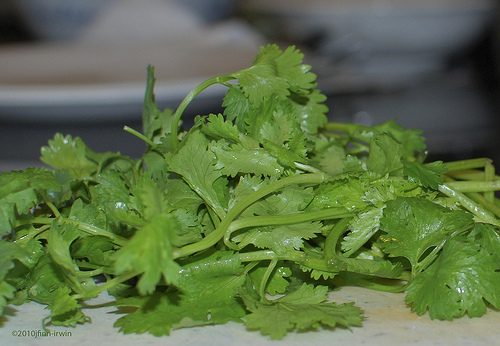 J&D Produce of Edinburg, Texas recalled its parsley and cilantro packaged on Nov 30 and Dec 6 and distributed under the brand of Little Bear. No illnesses have been reported associated with this produce. Other related products by the same company are also included under this recall.

Independent testers found salmonella on parsley in Quebec, Canada, and on cilantro in Detroit, Michigan, prompting this recall.

The salmonella contamination has been tentatively tracked back to one processing line in the Texas plant. The produce is sold to consumers through grocery stores and repackaged and sold to restaurants.

In response to the problem, J&D Produce has stopped and sanitized all production lines, added manual inspections, and brought in outside consultants.

Other related products being recalled by J&D Produce include:

The response of J&D Produce to the finding of salmonella in their produce is what I’d like to see all companies do. If sanitizing all production lines in the plant and reassessing their procedures were an automatic response by all companies, the Food Safety Modernization Act wouldn’t have been such a pressing issue.

Image of cilantro by jfinnirwin, used with Creative Commons license.