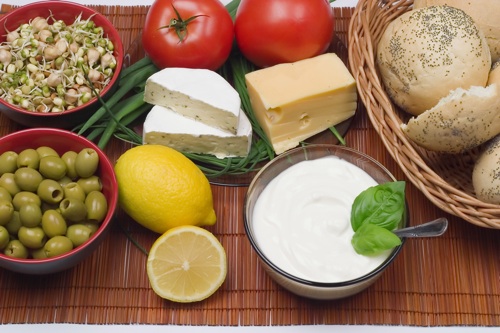 Ancient Greeks used to say: “Fear old age because it never comes alone”. There are many reasons we don’t like growing old. One of them is that we begin to gain weight. A new study published in the November 2010 issue of the American Journal of Clinical Nutrition shows that adherence to the Mediterranean diet attenuates age-related weight gain.

What Is The Mediterranean Diet?

The Mediterranean diet is nutritional recommendation inspired by the traditional eating patterns of countries in the Mediterranean basin (Greece, Spain and Italy). It is a diet full of vitamins and antioxidants from fruits and vegetables; rich in unsaturated and omega-3 fats from olives, fish and nuts; and abounding in fiber from whole grains and legumes. Red unprocessed meat and wine are also consumed but at low frequency and amounts.

Numerous studies have documented the many health benefits of the Mediterranean eating plan. For this reason, the Mediterranean diet has been suggested as a model for healthy eating. Specifically, this eating pattern favors longevity; it protects against the metabolic syndrome and type 2 diabetes; it blocks hypertension; it prevents cardiovascular disease; it fights cancer, rheumatoid arthritis, depression and age-related cognitive decline. And now this new report shows that the Mediterranean diet prevents age-associated weight gain

The goal Dr Juan-Jose and his group, who conducted the study in the University of Navarra, Spain, was to assess how the Mediterranean food pattern could influence adult weight changes over the course of 6 years. The participants surveyed were 10,000 middle age Spanish men and women averaging 38 years old. They were given a questionnaire that assessed their habitual diet by asking them how often they consumed certain food items. Based on the similarity of the participants’ diet with the Mediterranean diet a score was calculated. The higher the score the greater the conformity to the Mediterrenean diet.

How Does The Mediterranean Diet Protect You From Piling More Pounds?

According to Juan-Jose Beunza, there are a number of mechanisms that can explain the inverse association between the Mediterranean diet and weight gain.

1. Foods in Mediterranean diet contain a lot of fiber. Fiber is believed to influence appetite-suppressing gut hormone levels resulting in lower appetite and a decrease in food intake. Due to its satiety effect, people who eat more fiber often have a lower body weight than people who eat less fiber.

2. The Mediterranean diet is a low-energy density diet as it encourages high consumption of fruits and vegetables. Of course it includes some high-energy foods, such as olive oil and nuts. However, the type of fat contained in these foods has been linked to weight loss rather than weight gain in many studies.

3. The Mediterranean diet is not a low-fat diet. The relatively high amount of fat it contains makes it more acceptable to the taste and more likely that you will stick with it until you complete the program and lose the weight. This is why people who start the Mediterranean diet exhibit a much lower dropout rate than people who follow low-fat diets.

Common observation as well as personal experience tells us that as we grow older we tend to get fatter. Overweight and obesity is a public health concern for three reasons: (1) It is the most widespread and prevalent metabolic disorder, (2) its frequency continues to rise, and (3) it is associated with high mortality.

This new study on the effects of the Mediterranean diet, a diet that has been studied extensively the past 10 years, demonstrates that those who follow this dietary pattern can escape the weight gain usually observed with age. These results add to the mounting evidence that following the Mediterranean diet might be an effective strategy for the prevention of obesity.

Matthew Papaconstantinou, PhD, was born and raised in Greece, a country where the traditional Mediterranean diet evolved. As a scientist he enjoys following the latest research on the Mediterranean diet, the benefits of which he has been enjoying for years. He writes and blogs about other diets as well and offers a Medifast discount and a Nutrisystem coupon code discount, two clinically researched meal replacement programs.