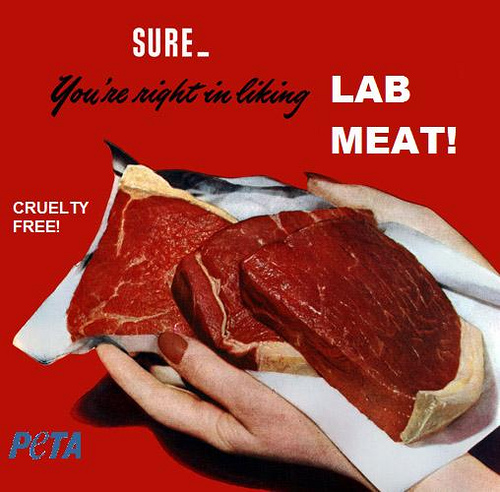 People who eat cheap meat usually fall into one of two categories. Some don’t care where their food comes from or its effects on the environment. Others simply can’t afford to pay for fancy grass-fed meat.

Given how unsustainable the industrial meat industry is and how impossible it seems to get people to give up their fast-food, my thought is, why not make in-vitro meat the cheap meat of the future?

In-vitro meat is bioengineered meat made in the laboratory. It’s real meat, but it’s created from stem cells or myoblasts (precursors to muscle cells) in a petri dish instead of from an actual animal.

In-vitro meat can be made without any animal cruelty. It’s even PETA-approved. In 2008, the organization offered a $1 million prize to the first company that brings lab-grown chicken meat to consumers.

Sure, in-vitro meat doesn’t address the underlying problem of our eating habits – we eat too much meat – but it would potentially improve some of the symptoms of our obsession with meat: global warming, pollution, excessive water use, land degradation, antibiotic-resistance, and disease.

Why not try to get people to eat veggie burgers instead of lab-grown meat, you might ask? Sure, veggie burgers are more ethical than factory-farmed meat from an animal cruelty standpoint, but studies have shown that processed vegetarian food has just as big a carbon footprint as industrial meat. In-vitro meat production would have a much smaller carbon footprint.

The idealistic solution to our meat obsession is to have everyone switch to a mostly plant-based diet by reconnecting people with where their food comes from. But I have yet to be convinced that this solution is going to happen on a global-scale anytime soon.

In the meantime, if people are unwilling to stop gorging themselves on cheap meat, why not make in-vitro meat the go-to animal protein? In addition to being more ethical and eco-friendly, in-vitro meat would be healthier because it can be engineered without saturated fat, hormones, salmonella, E. coli, mercury, dioxin, or antibiotics.

As of this time, no in vitro meat has been produced for human consumption because the cost is too prohibitive to allow synthetic meat to go mainstream. But the technology required is widely available, so the potential for mass-production is there.

The sad thing is that people would probably get more riled up about laboratory-made meat than they do about CAFOs.

Image courtesy of Mike Licht via a Creative Commons license.