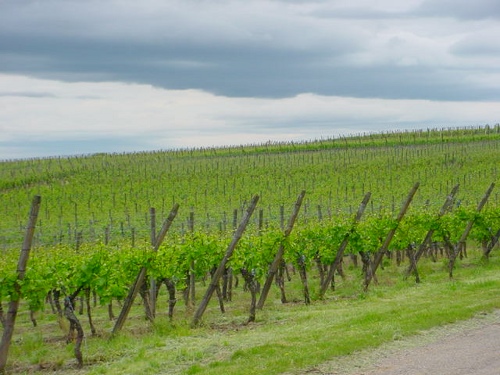 There is a completely absurd debate underway in France.  A group of wine makers called Terre et Vin du Monde is vehemently protesting the planned planting of a test plot of GMO grapevines near the Alsatian town of Colmar (a lovely place by the way).  The vines include a gene from Grape Fanleaf Virus, which will hopefully render them resistant to being infected with that very serious disease.  The virus is spread by nematodes (nearly microscopic roundworms) that live in the soil.  The infected vines fail to properly ripen their fruit and eventually die. Once a soil is infested with these nematodes and the virus, it is never really the same again.  If the vineyard is fumigated it will be ok for a few years, but then the nematodes and virus build up again and the yield and quality once again decline.  There are 25,000 acres of prime French vineyards that have this problem.  Other countries have infested areas as well.  For instance – there are some vineyards in the Napa Valley of California that have the same problem because they got contaminated before people understood how the disease is spread.

So, you might think that French winemakers would be thrilled to have a way to once again produce great wines on these otherwise ideal sites.  So what is going on?  The wine makers say that they are worried about how even planting the test vineyard could risk “contamination” of the vineyards of France and their reputation in the wine market because European consumers are so afraid of GMOs.  What makes this absurd is that the biology of vineyards is such that “contamination” isn’t even a possibility .

If you have ever heard the “birds and bees” lecture you know that the way that plants and animals exchange genetic traits is through sexual reproduction.  For a plant, the pollen carries the male genes and the ovary of the developing fruit has the female genes.  When seeds are formed, they have the combined traits of both parents.  It works that way in grapes, but actually almost all grape flowers are fertilized by their own pollen (from the same flower).   But in the case of wine grapes, that is actually irrelevant because grapes are not grown from seeds.  If you want a new grape plant you take a cutting from an existing vine.  Thus, grapes are “cloned” as essentially all fruit is “cloned.”  If you grow the seed of any fruit, you don’t get the same variety any more than our kids are exactly like us.  “Cloning” (or vegetative reproduction) is how these crops have been grown for thousands of years.  So if GMO grape pollen were to ever pollinate a non-GMO grape flower it wouldn’t make any difference at all because that seed is simply discarded after the wine is made.  Grape growers quite normally grow different varieties of grapes next to each other and there is never any issue of the two varieties “contaminating” each other. Grapes don’t cross with other plants either.  Also, if you are not trying to scare someone you simply call the process “cross pollination” – something that happens quite naturally all the time.

It Gets Even More Absurd

All the grapes in France (and almost everywhere else) are grown on what is called a “rootstock.”  Back in the 1800s a soil insect called Phylloxera was transported from the US to Europe.  The native American grapes can tolerate this insect, but it killed the European grapes.  Thus, all European grapes are “grafted” onto rootstocks of American origin (grafting is also something we have known how to do for thousands of years).  In the case of the experiment in Colmar, it is only the rootstock that is GMO because the nematode/virus problem is only for the roots.  The top of the vine that makes the fruit and any pollen is exactly what it always has been.  Thus, these GMO vines will have only an inch or so of woody trunk above the soil line.  They will form no flowers.  Their DNA has no means of “contaminating” anything.  Conversely, the genes of this virus get into the non-GMO vines on a massive scale and that is why the vine is diseased.  The only real “contamination” issue is the nematodes on the 25,000 infested acres.

I suspect that the winemakers actually understand this, or at least they could.  I would hope that European consumers could understand it too, but that seems to be asking too much these days.  It is sad to watch what was once an advanced culture descend into a state of irrational fear.

You are welcome to comment here or to email me a feedback.sdsavage@gmail.com