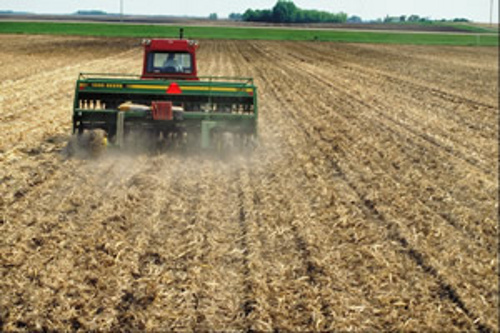 The phrase,”industrial farming” is something I see on lots of web posts and comment strings.  I’m guessing that this intentionally derisive terminology conjures up some pretty negative imagery for most people not directly involved with farming.  The use of this emotive term raises two questions for me:

Well, let’s consider some of the features of modern farming

It might not fit your view of a romantic, rural life-style, but if you are actually the farmer, the comfortable, efficient, sophisticated farm equipment available today sounds pretty good.  As in all “industrialized” segments of our economy, machines and computers make farmers more productive and eliminate the most laborious (and often dangerous) parts of the job.  There is a detailed history of farm equipment on the John Deere website that is worth a read.  Mechanization of farming has enabled the workforce directly involved in farming to drop from ~40% in 1900 to less than 1% today.  Over this time period, people have chosen other careers intentionally.  There are not a lot of people who want to work on farms in the old, labor-intensive way.

Actually, hand-labor-intensive crops (e.g. coffee, strawberries…), or high labor cropping systems (e.g. Organic) are on a collision course with demographic trends.  The pool of unskilled farm laborers upon which rich Americans have (unethically) depended is only going to decline over time and make rejection of “mechanization” an increasingly non-viable option.  Unless you are the one doing the work, it isn’t really reasonable to insist that mechanization be avoided because it’s too “industrial.”

The widely held image of US Agriculture as “corporate” turns out to be in direct conflict with the facts.  The USDA tracks this in the “Census of Agriculture” that it conducts every 5 years.  It isn’t completely accurate because it does not differentiate between real “corporations” owned by uninvolved stockholders from farming operations that are conducted by an extended family and just put under a corporate structure for tax/estate-planning reasons.  Even so, the USDA map above shows that the vast, vast majority of farming is still on family farms.  That is not surprising.  Farming is a highly risky and not highly profitable venture. Try selling that on Wall Street!  The most “corporate” sectors of farming are in fresh produce where scale is critical to be able to respond to the leverage of the retail industry.  Fresh produce is a tiny part of agriculture on an area basis.

“Industrial Farming” Is Large-Scale” (True, But Not Probably Like What You Think)

If I told you that I have visited 5,000 to 12,000 acre farms you might imagine something, well, “industrial.”  I’ve met with many such growers and my interviews were with the 1-2 family members to do almost all the farming. We met at the kitchen table or in a corner of the machine shed where there might be a sticky, runt calf under heating lights being bottle fed. Even these seemingly huge operations are family farms. Because of the mechanization I’ve described, an extremely large grain farm can be run by a very small number of people who often work off-farm as well.  Still, if you met these farmers, they would perfectly fit your image of “the salt of the earth, hard-working folks”, and you would also see that they are quite concerned with the environment. In fact large farms have a higher adoption rate of the most sustainable practices I will describe below.

Actually, there is a trend both towards large farms and small farms.  Between 2002 and 2007 there was a small increase in large farms, but a huge increase in the number of very small farms (see the blue in the map above, 10 farms/dot). In total the area involved is not large, but it is an interesting trend.  There are a lot of complex and region-specific dynamics here, but just the fact that much of farm acreage is in larger farms does not need to be a big concern.  If you don’t believe me, go meet some of the folks that run the large farms.

“Industrial Farms Use Synthetic Fertilizer, Hybrid Seeds and Pesticides” (True, But The Alternatives Are Not So Great)

The graph above shows that “Pre-industrial” yields were low and stagnant over 60 years. The amazing yield gains in the “industrial era” came first from synthetic fertilizers, then from improved plant breeding, pesticides and most recently biotechnology.

Along the way there were definitely environmental issues with the way farming was being done, but also changes and improvements.  The Dust Bowl calamity of the 1930s lead to the establishment of the Soil Conservation Service as the first step towards improving farming practices.  The pioneers of “no-till” agriculture got started in the early 60s working to save fuel and stop erosion. The Environmental Movement of the late 60s lead to the establishment of the EPA in 1969 and pesticides have changed dramatically.  By the time I started working in agriculture in 1977 there was already a major research effort focused on improving the environmental and safety profile of agriculture.  Since that time I’ve had the privilege of working with a wide range of public and private scientists and with farmers to see these improvements implemented.

An Ideal for Industrial Agriculture

Even though mainstream industrial agriculture has come a long way, there is an even better “suite” of sustainable practices that would ideally see further adoption.  I sometimes call these the elements of “Agriculture 2.0”

There were  309.5 million acres of harvested cropland in the US according to the 2007 Census of Agriculture.  Even after 30 years of “rapid growth”, only 1.29 million of those were Organic.  But an anti-industrial purist would only consider a small part of that (at most 20%) to be truly non-industrial.  What about “Ag 2.0?” Unfortunately, the Bush administration cut funding to the CTIC (the organization that used to track things like tillage practices).  Groups like CTIC now estimate that, 5-10% of the corn/soy rotation (~10 million acres) in the US are farmed with “continuous no-till” – the most important feature of Ag 2.0.  I estimate that the total area that is utilizing at least some Ag 2.0 practices is on the order of 70 MM acres or possibly higher. Looking at this graph, which sustainable alternative looks to have the most realistic potential for growth?

Non-Industrial Farms Exist (True, but the model is not scalable)

I’m all for small-scale, local farms, CSAs, gardens and the like, it is just that this cannot be extrapolated as the kind of farming that will feed the US population, let alone the millions of people around the world who depend on US agriculture.  To think that it can is actually a dangerous delusion that is wide-spread among our non-farming population.  People just don’t understand the scale of food production that is needed.

The demonization of “industrial farming” serves no constructive purpose.  Yes, modern farming is “industrial.”  It has to be.  Like any industry, farming can be improved from an environmental point of view (and it has, dramatically). We will accomplish a lot more for the environment and for humanity by supporting the further adoption of “Agriculture 2.0” practices on “industrial” farms than by pretending we don’t need it.

You are welcome to comment on this site or to email me at feedback.sdsavage@gmail.com