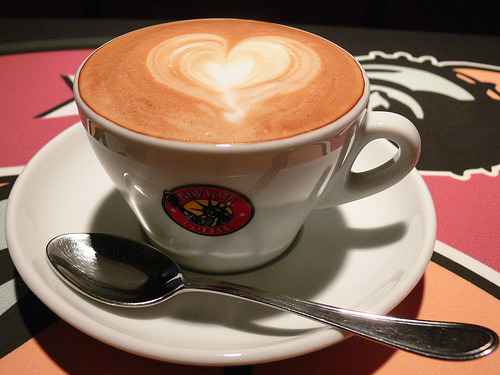 The industry that has been providing us with high quality coffee may seem to be doing well today, but it actually faces a combination of issues that may well render our lattes and capachinos a very expensive indulgence in the future.  We will probably stop worrying about whether it is “Fair Trade” or “Organic” and worry about whether we can get it at all.

Any coffee aficionado will tell you that ‘arabica‘ coffee (Caffea arabica) is far better than the lowly ‘robusta’ coffee (Caffea canephora) that made up the Folgers-style “cup of Joe” that I grew up drinking.  These are actually two different species of coffee and arabica only does well in a limited range of environments – mainly consisting of higher elevations in the tropics.  At lower elevations the pests (insects and diseases that ‘robusta’ can tolerate), devastate the more delicate, arabica types.

The places where arabica coffee can grow are shrinking.  Even subtle temperature increases caused by climate change raise the elevation limit for successful arabica cultivation.  Mountains get smaller as you go higher so you can imagine the issue.  There is less and less land suitable for arabica production.  If this was the only problem it might be fixable, but it isn’t coffee’s only challenge.

Arabica coffee production is not well suited to mechanization, both because it is often grown on difficult terrain, and because it dosen’t have a normal, “crop” cycle.  Coffee has many “flushes” of flowers triggered throughout the year by precipitation. At any given time there are coffee berries of different maturities on every branch. That is why it needs to be hand-harvested if you want good quality. That feature of the coffee industry puts it on a collision course with demographic trends in many coffee producing regions of the world.  As fertility rates fall and populations age, there are going to be less and less people who are able or willing to do this sort of difficult, low-paying work.  One major coffee company commissioned a survey of coffee growers in Central America asking what changes they would like to see to make coffee growing better.  The overwhelming response was the desire to grow something other than coffee.  “Fair Trade” or not, the people who grow our coffee are not thrilled about doing it and there are going to be fewer and fewer folks willing to make that effort in the future.  So this part of the coffee industry is not only facing a smaller growing area, it is facing a lack of growers.

Why Plant Breeding Won’t Save the Day

If you have read my previous blogs you know that I am a big believer in technological solutions to agricultural problems or challenges.  In this case I don’t believe that will happen.  My friend, John Vendeland, explained the problem to me (he should know, he got an achievement award from the Specialty Coffee Association of America (SCAA) for his work on developing the coffee industry in Kuawi in the 1980s).  John explained that while it is possible to use some rather extreme “conventional breeding” methods to move pest resistance genes from ‘robusta’ coffee to arabica lines (it requires chromosome doubling of the ‘robusta’ and many back-crossings), the process is so slow that it won’t really help.  The old picture below is of John with Dr. Alcides Carvahlo, a very influential coffee breeder who did this sort of difficult work for his entire, 52 year career.  He died in 1993 and some of what he was working on has still not been commercialized because the process takes more than 20 years. Breeders are still working, but these issues are arising too fast.

John was asked to give a talk to the SCAA last year about the potential of biotechnology to help the coffee industry (an industry that pledged not to allow any biotech back in the 1990s).  His message was blunt.  “Don’t either worry about biotech coming in to the coffee industry or hope that it will.” He explained that no company is going to invest the $30-60 million it would take to do the research and regulatory work to commercialize biotech coffee because it just doesn’t “pencil.”  Yes, there is a lot of coffee grown (>10 million hectares), but very little is planted in a given year, and maybe 50 to 100 ha would be the accessible part of the market in a given year.  At that rate there would be no way to recover the investment.

Not surprisingly, none of the companies that develop GMO crops are even thinking about coffee today.  It isn’t even clear whether it would be possible to deal with arabica’s pest or ripening issues with transgenic methods.  In any case it does not matter because it isn’t going to happen.  That conclusion would stand even without factoring-in the “marketing uncertainty” of GMO coffee.

What To Do as a Coffee Drinker?

I wouldn’t start hoarding supplies of premium coffee beans in your freezer.  These are trends that are going to play-out over decades, not years. Even if it happens faster, life could go on without good coffee, right? (well, maybe not in Seattle…)