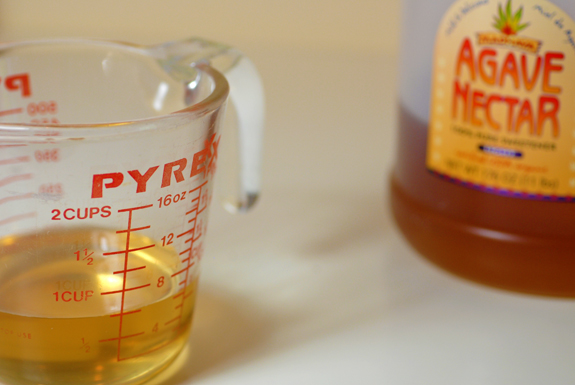 When I went vegan years ago, agave nectar was one of the first things on my shopping list. It’s commonly used as a vegan substitute for honey – you can substitute it in recipes that call for honey 1:1. It’s also been touted as a healthy natural sweetener that doesn’t affect blood sugar levels in the same way as conventional sugar.

[social_buttons]Agave nectar has come under some fire lately, and a recent report from The Weston A. Price Foundation basically says that it’s as bad for our bodies as high fructose corn syrup (HFCS).

The report says that:

agave “nectar” and HFCS “are indeed made the same way, using a highly chemical process with genetically modified enzymes. They are also using caustic acids, clarifiers, filtration chemicals and so forth in the conversion of agave starches.” The result is a high level of highly refined fructose in the remaining syrup, along with some remaining inulin.

They also debunk the claims about its effects on blood sugar levels. They’re saying that fructose content has a point of diminishing returns and that agave nectar goes way beyond that point. There’s a lot of conflicting information out there about this. An article from Natural News seems to support those claims about fructose, but then the LA times spoke to Roger Clemens, a professor at USC and spokesman for the Institute of Food Technologists about fructose in agave nectar. From what he said, it sounds like the amount of fructose can vary a lot depending on how it’s processed.

The Weston A. Price article goes on to slam agave nectar because of its saponin content, citing that saponin causes all manner of undesirable symptoms, from diarrhea to miscarriage. The report says, “At the very least, agave products should carry a warning label indicating that the product may cause a miscarriage.”

Opinions about saponins seem to vary depending on who you ask, too. Saponins are present in other foods, like alfalfa and many varieties of beans, which carry no such warning label.

They also say in the article that agave nectar is not a raw food, which is just flat out untrue. Agave nectar is not always raw, but it can be. While some manufacturers process agave using high heat, you can find raw agave processed with enzymes instead of heat. Many sorts of agave are processed using low heat, below the 118F threshold which is the limit for food to be considered raw.

Before we purge agave nectar from our cabinets, it’s important to consider the source of this information.

A comment on a Re-Nest article about the topic mentioned that the Weston A. Price Foundation is “widely criticized” and even called them “anti-vegan, anti-vegetarian and very pro-dairy.” A little Googling did turn up a few articles to support this comment. The site Disease Proof rails on the Foundation for “advocating a meat, butter, and raw milk-centered diet,” among other things. Veg Source has some not-so-nice things to say about them, too. Heck, their own site talks about their “emphasis on animal foods as essential for health.”

All of that said, agave nectar doesn’t strike me as terribly healthy. At its heart it’s a sugar, and as Dr. Robert Lustig would tell us, sugar is hazardous to our health in pretty much any form. Agave nectar isn’t health food, but I don’t think it’s the poison Weston A. Price Foundation makes it out to be, either.

So, I’m going to be keeping my bottle of agave nectar in the pantry for when I want to make truffles or sweeten my tea and practice moderation. What about you?