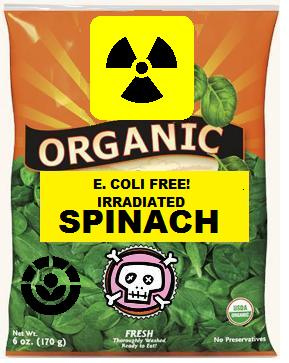 If you’re a Whole Foods shopper who occasionally peruses the market’s free pamphlets and brochures, you might know a thing or two about the dangers of irradiated food–at least, that’s where I learned about it. We hear a lot of talk about harmful ingredients: dyes, preservatives, trans fats, and HFCS, for instance, but little is mentioned about this equally harmful process that can alter the molecular composition of the food you eat, damaging valuable vitamins, minerals, and enzymes, all in the name of making said food safer.

During irradiation, food is exposed to ionizing radiation in an effort to destroy microorganisms, viruses, bacteria, or insects that could be dangerous if consumed by people. In addition to sanitizing our food, irradiation can also be used to prevent sprouting, delay ripening, or increase juice yield–in other words, messing with a fruit or vegetable’s natural life process or progression. How exactly does irradiation achieve all these things? By damaging the DNA of the food in question, basically stunting any growth.

Considering how much time and effort is spent attempting to halt or reverse DNA damage to our own cells, then, it’s ironic that more attention isn’t paid to the process of food irradiation. We’re constantly told to eat more fruits and vegetables because they contain antioxidants, the things that fight free radicals (which are responsible for oxidation and thus, cell damage!) However, the vast majority of produce in this country is irradiated, therefore containing the very stuff we try so desperately to avoid!

Pretty strange, huh? Behind the jump, there’s a bunch more reasons why you should avoid irradiated food.