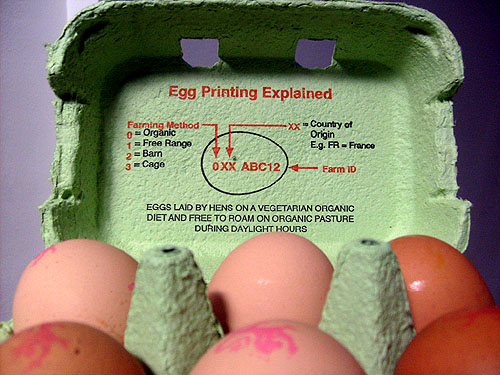 How do you like your eggs? The answer to that question used to be sunny side up, scrambled, or over easy. Now, it’s cage-free and organic, thank you very much.  Since I moved to London recently, I’ve noticed a greater level of public awareness regarding egg production and chicken welfare as compared to the United States.  Most supermarkets and chain restaurants, and even some giant multinational corporations, sell or use exclusively free-range eggs and prominently advertise doing so.

It’s certainly a big change from the United States, where cage-free eggs are generally available but are not as widespread in popularity as in the United Kingdom. It appears to be a slowly growing movement back at home, and it’s great news that some states have begun to pass laws improving living conditions for chickens. Unfortunately, we’ve still got a long way to go before reaching the level of public demand and corporate response for the right kind of eggs that can be found here in the UK.

Here are a few of the differences I’ve noticed with regard to egg production and marketing in the UK and the States.

1. Some supermarket chains in the UK sell exclusively cage-free eggs.

According to a recent article on the Guardian.co.uk, sales of cage-free eggs have risen dramatically in the UK over the past year. Happily, caged egg (also known as battery egg) sales have dropped accordingly and aren’t even available at certain grocery stores. Large chains such as Waitrose, Marks & Spencer, and Sainsbury’s have stopped selling battery eggs, which has helped push more shoppers to purchase free-range eggs. To be sure, some of these are higher-end supermarkets where not everyone can afford to purchase groceries. However, it’s a  step in the right direction for large companies to proclaim their allegiance to chicken welfare and animal rights, and a stance that can hopefully help consumers follow suit.

As public awareness has grown over the past year thanks to various promotional campaigns on the issue, a number of corporations have responded by banning caged eggs from their stores and restaurants in the UK. For example, the same Guardian article states that the companies Little Chef, Starbucks, and Foxes Biscuits have stopped serving caged eggs to the tune of 17.6 million fewer caged eggs per year. I’ve personally been shocked and pleasantly surprised by how many chain stores proudly advertise their use of free-range eggs on products like this Starbucks egg and bacon sandwich.

Interestingly enough, even a single company can have separate policies on egg usage in different countries. Another Guardian article describes the contradictory policies McDonald’s has set in place in the UK and the States. While free-range eggs are standard at nearly all British locations and will be phased out completely by 2010, the company has only just started testing cage-free eggs in the States and won’t even serve them at restaurants until 2011.  It appears that McDonald’s doesn’t find chicken welfare to be as big a concern to the American public, or the company wouldn’t be dragging their feet so slowly from a public relations standpoint.

3. Egg carton and the eggs themselves come printed with detailed production information.

Lastly, I find it impressive that you can find out where your eggs are coming from at the most basic and direct level of egg consumption.  Every egg I’ve purchased so far in London comes printed with organic, cage-free, barn, or caged status, as well as their country of origin and Farm ID. Amazing! As you can see in the photograph to the left, my egg is organic, English, and from farm 17116. I’m impressed that there is such a detailed system that allows you to easily trace the source of your eggs.

It seems like the U.S. needs to catch up in terms of availability of cage-free eggs and standardization of healthy living environments for chickens. In addition, if Americans can move away from purchasing caged eggs, we can hopefully push more corporations to embrace free-range eggs as the accepted norm. Eggsellent job, UK! You’re really setting a good eggsample! Sorry, couldn’t resist…