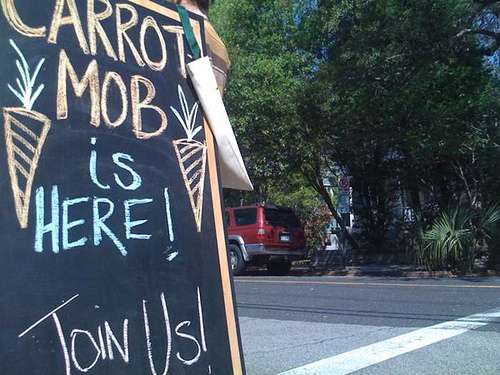 The folks behind Carrotmob continue to demonstrate the power of using your dollars to vote for environmental change, and they’re starting to get some press as well.

The first Carrotmob “reverse boycott” started with a convenience store in San Francisco.  The store owner out-competed a few dozen other businesses by pledging to use 22% of the profits from one day to make his store greener (in this case by installing energy efficient lighting and other green improvements).  Carrotmobbers flooded his store on the appointed day and left the store owner with $9,200, enough to make multiple energy efficient improvements as well as having the best sales day all year.

Carrotmob and their “reverse boycott” system works like this:

The great aspect of this is there is very little time, energy, and initiative needed on the part of people who want to foster change.  Members simply show up on the appointed day and purchase goods they would have purchased anyways.  In the coordinated Carrotmob fashion though – through organized consumer purchasing, those dollars add up and have a powerful voice.

The unique “reverse boycott” is truly a win-win, consumers buy goods they need, and get to identify the businesses in their local community who are most apt to be environmentally friendly.  The businesses win a big day of sales, positive environmental changes to their shop, and a likely loyal long term customer base.

This is a great example of not only buying locally and supporting local businesses, but also of the power of using your dollars to further your ideals and values.  Remember that how you spend your dollars (including your food dollars) speaks volumes and forces companies to pay attention.  Buy local, buy organic, buy sustainable, and reward socially responsible businesses.

Carrotmob, a fairly grassroots organization, recently got some mainstream press in an article in Time Magazine.  Maybe the mainstream exposure will encourage more folks to start similar movements, or join the Carrotmob in their hometown.  You can check out the Carrotmob website here.

Want a few more ideas on how to make your food dollars speak for you?  Check out a great article – Declare Your Food Independence This July 4th. Or read about another socially responsible company, Whole Foods, in Reusable Grocery Bag Use Triples in Past Year at Whole Foods.

Image credit: thedigitel’s at Flickr under a Creative Commons License.