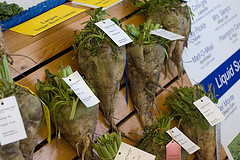 After writing my post earlier this month about genetically engineered ingredients and animal cloning, I was given the opportunity to speak with Lisa Bunin, Campaign Coordinator with the Center for Food Safety.

We spoke about some exciting new developments in the fight against genetically modified beet sugar.

This registry documents commitments from over 70 grocery chains and food producers who have vowed not to use or sell GM beet sugar.  Some of those on the registry include well known companies such as Organic Valley, Equal Exchange, and Turtle Island Foods.

By signing the registry, companies:

Companies have rejected the GM sugar beets not only because they have not been proven safe, but also because the EPA had increased allowable levels of herbicide residue on GM sugar beet roots by up to 5,000 % when the USDA approved the crop for planting!  (This was at the request of Monsanto, the sole manufacturer of GM Roundup Ready sugar beets.)

Not only does the planting of GM sugar beets promote massive use of the herbicide Roundup, it also puts other Beta-related species of plants (such as chard and table beets) at risk of cross pollination if grown in the same region.

This could ultimately result in the permanent loss of non-GM seeds and foods.

The sugar extracted from the roots of these GM sugar beets will be used in processed foods and sold, unlabeled, to consumers beginning this year.

What can we, as consumers, do to take a stand against the use of GM beet sugar?

According to Lisa Bunin, we can start by checking the registry and supporting those companies who are against the use of GM sugar.  We can also write to companies such as Mars and Hershey’s (both of whom in 2001 told consumers they would not use GM sugar, but now are remaining silent on the issue) and encourage them to avoid using this controversial ingredient.

The Center for Food Safety has a Mars/Hershey’s petition you can sign.

Of course, by purchasing organic foods you are supporting non-GM agriculture,  but I found this bit of information interesting….. the organic company Seeds of Change is owned by the M&M/Mars company.