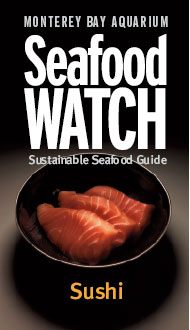 Sushi. It’s the last topic you’d expect to see on a sustainable food site. But Monterrey Bay Aquarium is inviting you to go out and eat sushi between October 22 and 28 as part of a nationwide sustainable seafood awareness campaign. If you join the National Sushi Party, be sure to take along the new pocket sushi guide that has just been launched. The guide offers tips for what sushi items on the menu are the safest choices for you and the ocean.

The site offers not just the pocket guide, but some good tips on how to eat sushi responsibly. You can RSVP to join the party and share your thoughts at the Monterrey Bay Aquarium facebook page.

A few notes on sushi before you head to the party.

Sushi does not refer to the fish, or even the whole piece of rice and fish. Sushi refers to just the rice. Sushi is not always seafood and not always raw. When served without rice, pieces of raw fish are called sashimi.

There are several types of sushi. Sushi that is rolled in sheets of seaweed is often called maki. Sushi that is formed in the hand and topped is called nigiri. If a special wooden mold is used to form square sushi, it is called oshizushi. When the fish or toppings are served scattered on the sushi, this type is called chirashizushi. Rolled sushi can also be wrapped in very thin layers of omelette.