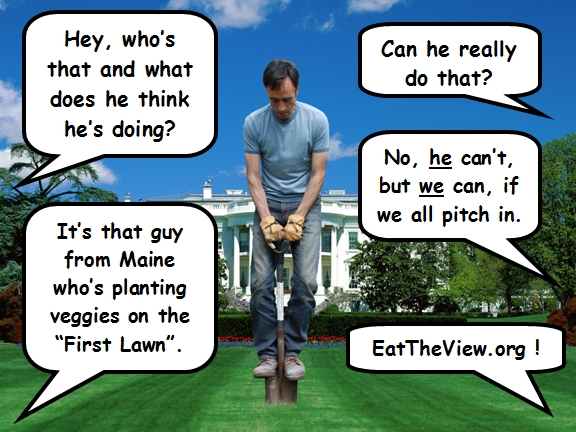 If you’re a regular Eat.Drink.Better. reader, then you’re probably familiar with the clever, non-partisan Eat The View initiative to put vegetable gardens in high profile places like the White House lawn.

With the economy and the forthcoming presidential election top-of-mind, a status report seemed in order. After all, we will very soon have an answer to just who may receive the petition to restore the White House victory garden at the very moment in which tens of millions of people may be thinking about gardening as a means of survival.

In short, we Americans need Eat The View to succeed!

If you agree, then you’ll be pleased to note that over 300 folks have signed up to support the overall campaign and many, many more  have signed the petition regarding the First Lawn in particular. If like me you’re following ETV on Twitter (@EatTheView), then you may have read of recent press coverage both stateside and in Europe. There’s a new downloadable widget, too, that asks “Which candidate is more likely to replant a victory garden on the White House lawn?” (Memo to Republicans: you might want to get cracking on this particular vote. As of Monday night, Obama was winning handily.)

Furthermore, If you haven’t yet seen the three terrific ETV videos, go check them out and share them with your friends or upload them to your blog. Finally, there’s the little lawn sale. To raise funds for the ETV project’s parent organization, Kitchen Gardeners International, you can symbolically purchase a bit of the First Lawn and donate it back to the next President. (And, yes, the donation is tax-deductible!)

With so much going on, lead organizer Roger Doiron (pictured above) is still puzzling through some future endeavors.

“One bigger idea…I don’t know how to do it…is to try to ask this question to the candidates themselves: ‘If elected, would you be prepared to ‘Eat the View’?” Doiron wonders. “Could it be done through the debates?  Do we have a contact with Chris Matthews, Brian Williams of NBC, or someone else who’s likely to interview the candidates?”

• Hail to the Chief Gardener: Sow Seeds of Climate Change at the White House