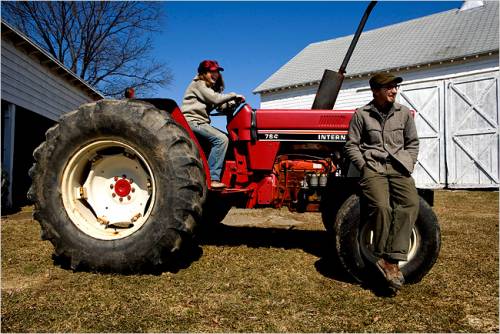 The New York Times ran an article today about the growing number of urban professionals in their 20s and 30s who leave their city lifestyle behind and move to the country to farm. Aptly, these people are called “first-generation farmers” as if they have arrived from a different culture altogether. In many ways they have abandoned a whole culture for another one, but they have taken with them one urban sensibility that may be the key to their success.

Farming takes patience and is physically demanding. Like any business, the start up period yields little financial reward. For those used to a steady paycheck and a great deal of free time, this can be a shock. But just as the first-generation is leaving behind an entire lifestyle and culture, they are also bringing a business acumen not previously seen in the “back to the land” movements of the 1960s and 70s. By growing on small plots and selling their crops at different urban farmer’s markets, these young farmers are creating a business that is as financially sustainable as it is environmentally so.

Part of their success has to do with increased demand from a public awakening to the ills of factory farming and food importation. With more greenmarkets opening and a larger customer base interested in organic, local food, many of these small scale upstarts are able to turn a profit quickly. This promise of making a living further encourages urbanites who have an affinity for tilling the land. This is an important thing to remember when you go to the market or collect your CSA box: you are not only supporting a single farmer, you are supporting the entire industry model. In other words, an interest in homegrown food home-grows farmers.

This article is well-timed given the upcoming release of “The Greenhorns,” a documentary about the current agrarian movement by filmmaker, Severine von Tscharner Fleming. A great personal account of the filmmaker and her documentary are available on Ethicurean.

Both the New York Times article and the Ethicurean post are worth a look. There is little more satisfying than a socially-beneficial business model, particularly the kind that single-handedly employs young people, provides more nutritious and safer food, and revolves around respect for the environment.

(Photo by Chris Ramirez for The New York Times)